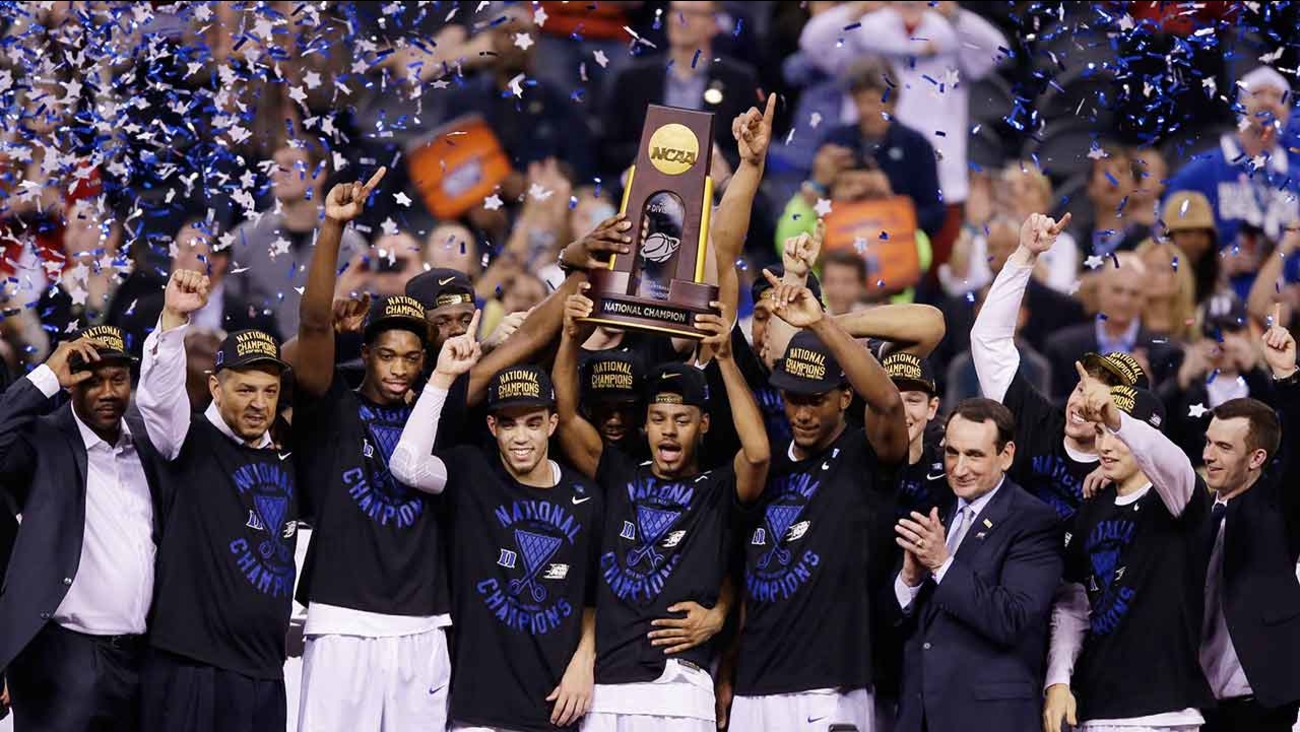 INDIANAPOLIS -- Over a matter of mere minutes, the youngsters at Duke grew into salty old pros.

Call them freshmen. But please, do not call them kids.

Led by Tyus Jones and Jahlil Okafor, Duke's talented group of potential one-and-doners played like veterans down the stretch, outscoring Wisconsin by 14 points over the final 13 minutes Monday night to grit out a 68-63 victory for the program's fifth national title.

"It shows a lot about their confidence," said Quinn Cook, Duke's only senior starter.

Okafor, the likely first pick in the NBA draft if he decides to leave, got outplayed by Badgers senior center Frank Kaminsky most of the night but came through big when the pressure was highest.

The 6-foot-11 freshman made two straight buckets over Kaminsky, sandwiched between a pair of 3-pointers from Jones, to help the Blue Devils (35-4) turn a one-time nine-point deficit into an eight-point lead with 1:22 left.

A furious Wisconsin rally ensued, but it came up short. Then, it was Okafor on the bottom of a rowdy dog pile - a scene reminiscent of the last time the Final Four was Indianapolis, back in 2010 when Duke edged out Butler in another scintillating final. The Blue Devils also took one here in 1991 - the Grant Hill, Christian Laettner squad.

"It was heaven," coach Mike Krzyzewski said of the stadium where he's now 4-0 in Final Fours. "It was really divine."

Krzyzewski now has five titles, alone in second place on the all-time list, behind only John Wooden.

Coach K did it with a collection of All-Americans - many of whom won't be around too long.

Okafor, his buddy, Jones, and another freshman, Justise Winslow, might all be playing at an NBA arena near you next season.

Grayson Allen? He'll be back.

The most overlooked of Krzyzewski's first-year players stepped up with Okafor on the bench for much of the second half in foul trouble. Allen, the slam-dunk champion at the high school McDonald's All-American contest last year, scored 16 points - 12 above his average - including eight straight for Duke after Wisconsin (36-4) had gone up by nine.

"It was fun to watch my teammates do what they do," Okafor said. "They have my back the entire season, and it was no different tonight."

This was a savvy, calm, collected comeback against the team that wrote the book on that all season. Wisconsin kept its cool two nights earlier in an upset over undefeated Kentucky and looked like it would close the deal when it turned a 31-all halftime tie into a 48-39 lead after Kaminsky made a layup with 13:23 left.

The Blue Devils took the lead for good with 4:08 left when Jones made a 3, then fell hard to the ground while tangled up with Bronson Koenig. Dick Vitale's call: "You cannot be serious!"

On Duke's next possession, Kaminsky tried to wrap an arm around Okafor in the paint, but the big fella powered his way through it for the bucket and the foul. He missed the free throw, but a different point was made: Kaminsky had 21 points and 12 rebounds to Okafor's 10 and three, yet down the stretch, "Frank the Tank" struggled to get a good look and Okafor helped win the game.

"He got in some foul trouble, but because of his positive attitude, he made some big plays down the stretch," Jones said.

In the seconds leading to Okafor's first basket, Winslow appeared to step on the baseline. But the whistle never blew and he delivered it to Okafor for the score.

That, and the foul count, had the Wisconsin Twitterverse fuming about some calls. The Badgers got whistled for only two fouls in the first half, but the count in the second half was Badgers 13, Blue Devils 6. Duke shot 20 free throws to Wisconsin's 10.

"There was more body contact in this game than any game we played all year, and I just feel sorry for my guys that all of the sudden a game was like that," Badgers coach Bo Ryan said.

Even though Kaminsky schooled Okafor to draw both his third and fourth fouls early in the second half, Wisconsin couldn't pull away from an aggressive Duke defense that allowed only 55 points a game in the five contests leading to the final.

"Shots just weren't falling, and they were getting to the line, and when the tide changes like that, it's kind of hard to get back in the flow," said Badgers forward Sam Dekker.

Nigel Hayes had 13 points and Dekker, the key guy down the stretch against Kentucky, had a very quiet 12 for the Badgers, who were trying to bring their first title back to Madison since 1941. Dekker used his shirt to dab away tears during postgame interviews - a much different scene than the loose, fun-loving media sessions the Badgers put on all tournament.

For Duke, it was all smiles. The Blue Devils are taking another trophy home to the Cameron Crazies.

"All these guys have become students of the game, and they share knowledge," Krzyzewski said.

This was not a dominant, wire-to-wire effort the likes of which some of the Duke title teams have enjoyed in seasons past.

Kentucky and its quest for perfection stole the headlines this season. So, playing in relative shadows down on Tobacco Road was this group, which actually might have more one-and-dones than coach John Calipari does at Kentucky. Calipari was in the building, by the way - honored for his induction into the Naismith Hall of Fame. He got booed heavily.

In the end, it was all confetti and cheers. And it's not Calipari's team, but Krzyzewski's, that will end up in the history books.

Duke's Quinn Cook, left, drives to the basket past Wisconsin's Nigel Hayes (10) during the second half of the NCAA Final Four college basketball tournament championship game. 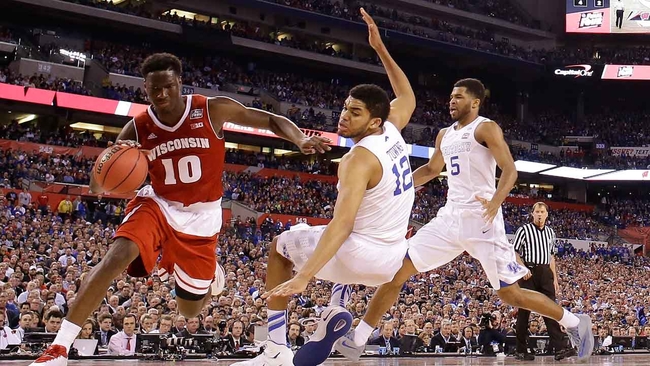 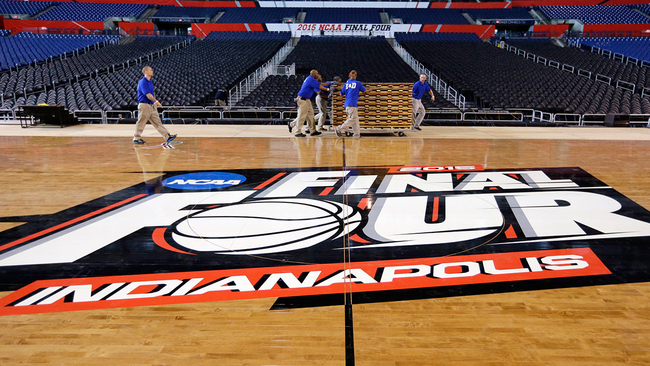