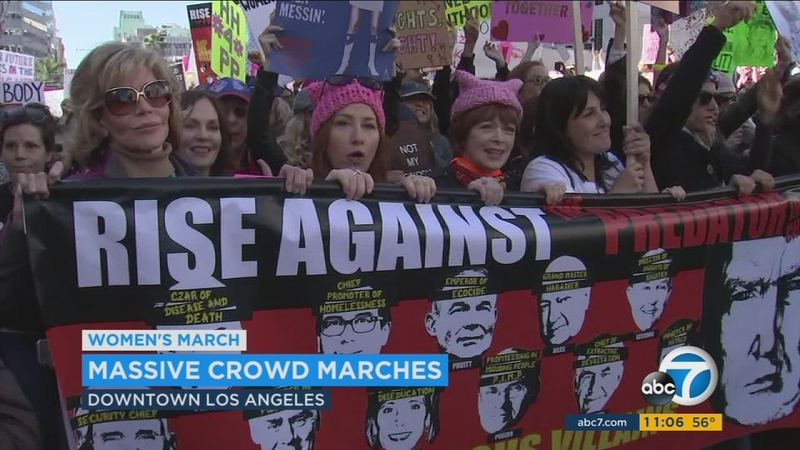 LOS ANGELES (KABC) -- The streets were flooded with crowds of people attending the Women's March in downtown Los Angeles Saturday.

Activists and event organizers said they joined the Women's March on Washington movement to make a stand for equality.

The local march, considered one of the largest women's marches in the country, started from Pershing Square at 10 a.m. to City Hall. Thousands, however, stayed in place, flooding downtown streets as activists and celebrities rallied.

The Los Angeles police and fire departments said well over 100,000 people were part of the demonstration. While organizers for the event said about 750,000 people attended the march.

The mission statement for the march reads in part, "We stand together in solidarity for the protection of our rights, our safety, our health and our families -- recognizing that our vibrant and diverse communities are the strength of our country."

750,000 Marchers strong here in LA! Thank you for being with us! LAPD has asked us to move to the second stage at 6th and Broadway!

Although organizers stress it is not a protest, the demonstration in L.A., as well as around the nation, was deliberately planned to be held on President Donald Trump's first full day as commander in chief.

Several people participating in the march say they stand in opposition of Trump's views on women and inequality, as well as his efforts to push policies such as immigration.

"I have to do something. I can't just sit back and just let all of this happen around me, with all of the changes I'm seeing, all the lack of tolerance. So, if all I can do is stand up and physically be here and say 'I don't support this, and I'm going to keep supporting tolerance and rights for every American' then, I'm going to be here," shared marcher Alice Dryden.

A see of Women's March Los Angeles activists cover the streets of downtown on Saturday.

Metro officials have added service and beefed up security to accommodate the large crowds expected at City Hall and throughout the march route, but the overwhelming amount of activists proved to be too much and led to Metro reaching capacity.

The gathering ended around 4 p.m.