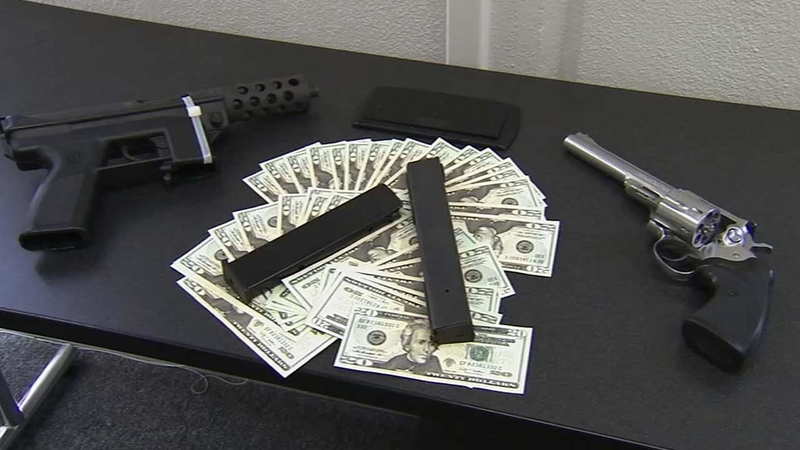 Authorities say they seized more than $100,000 worth of fake money from across the United States -- some found as far away as Jamaica.

The five women and three men are suspected of belonging to two gangs, "51 Nothing But Trouble Gangster Crips" and "52nd Hoover Gangster Crips". The suspects allegedly used the counterfeit bills to buy merchandise and gift cards at major stores, including Nordstrom, Toys R Us and Target, and then returned the goods for cash refunds.

"We'd see sales in the range of $500 to $800 to $1,000, and then they would return them," said Seal Beach Police Chief Joe Stilinovich at an afternoon press conference.

The suspects have allegedly been tied to 15 incidents in Seal Beach alone since last December.

"The initial incident occurred at our Toys R Us where they attempted to return some items for currency in December," Stilinovich said.

Seal Beach police allege the suspects used the money to pay for their criminal gang activity.

"Although this started with counterfeit bills, many of these suspects involved have substantial and violent criminal histories," Stilinovich said.

So far, authorities are not saying if the suspects, themselves, were involved in the making of the counterfeit bills.

"This investigation is still continuing to determine the source," said Rob Savage, the U.S. Secret Service Special Agent in Charge of the L.A. Field Office.

"You have inkjet printers, digital printers. This note was a digital note," he said.

Savage urged people and businesses to learn how to spot counterfeit money. The Secret Service provides training on what to look for on their website, www.secretservice.gov.