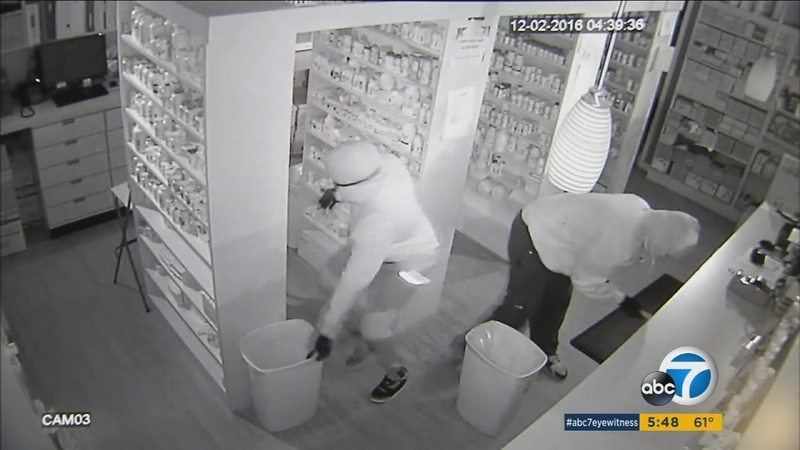 REDLANDS, Calif. (KABC) -- Burglars have targeted the Cajon Pharmacy in Redlands eight times since November 2015 and with its latest incident, the owner wonders if anything can be done to deter another hit.

The two thieves managed to ransack the business in under two minutes, just before 5 a.m. Friday.

"(They filled the) trashcan with so many medications, which is not going to be of any use for them for any reason," owner Khalid Mahfouz said.

According to Mahfouz, the thieves mainly got away with blood pressure, diabetes and cholesterol medication.

"They are after narcotic controlled medication. They're hoping whatever they grab will be something they can benefit from or they can sell on the street," Mahfouz said.

In the Friday's break-in, thieves managed to gain entry with a crowbar, but just five, prior a separate set of thieves who entered by smashing through a window.

Mahfouz said those four suspects were caught but did not stay behind bars for very long.

"Now they are released on bail, unfortunately. Somebody bailed them and now they are back on the street," he shared.

The pharmacy no longer holds large quantities of the narcotics thieves are after and has taken several steps to deter the break-ins.

"We have motion detector, we have the alarm, we have cameras and I mean everything need to be done for security wise we did it but still they find a way to break in. I am so frustrated," Mahfouz said.

Costs for supply restock and repairs has cost Mahfouz thousands of dollars.