Fire crews responded to the 26500 block of La Zanja Street at 9:15 a.m. The blaze had spread from one apartment unit to the attic.

"All we heard was, 'Everybody get out! Jump! Jump,'" said neighbor Anayeli Robledo. "There were several people jumping out of the window, many kids."

A mother lowered three children to residents below. Firefighters pulled a 1-year-old boy and a woman in her 20s out of the apartment.

In total, six young children and three women were transported to local hospitals. Authorities say four are in extremely critical or grave condition. The others suffered smoke inhalation.

After the fire was knocked down, firefighters found the family dog hiding in a drawer. He was given oxygen and was expected to be OK. 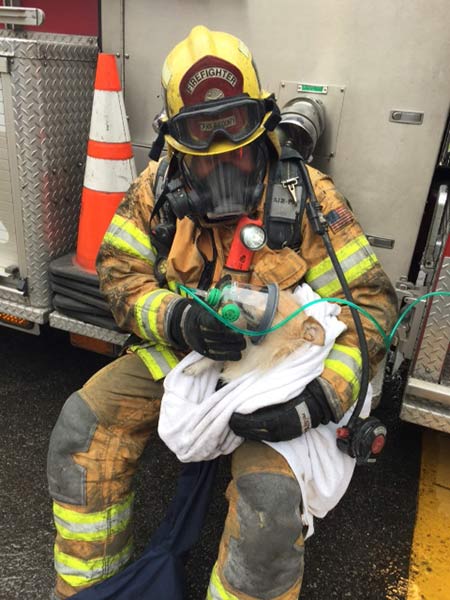 A firefighter gives oxygen to the family dog, who was found hiding in a drawer after the apartment fire was knocked down in San Juan Capistrano on Tuesday, Jan. 20, 2015.

Authorities say all nine injured people were residents of one unit. There were 17 people living in the four-bedroom apartment. Fire officials say the extra mattresses and blankets helped fuel the fire.

The smoke detectors in the apartment did not have working batteries, according to the Orange County Fire Authority.

Eight units in the apartment complex were damaged by the fire. The American Red Cross said it will be assisting displaced residents.

The blaze caused an estimated $180,000 in structural damage while destroying approximately $40,000 in property.