KABC
By Leticia Juarez
CAJON PASS (KABC) -- Repairing a section of the 15 Freeway that washed out in the Cajon Pass amid Friday's storm will cost about $3 million, officials said.

The crumbling roadway caused first a big rig to go over the side of the freeway - and then a fire engine that was dispatched to assist the truck driver also tumbled down over the side.

INCREDIBLE VIDEO: part of SB I-15 is washed away; fire engine tumbles off the side; fortunately no one hurt pic.twitter.com/5VMzQEBlqa

No serious injuries were reported.

The fire truck, which costs about $600,000, was considered a total loss, though firefighters were able to salvage about $100,000 worth of equipment.

Eyewitness News captured exclusive footage of the moment the fire truck plummeted over the side of the freeway when the road it was on collapsed. The monster storm that hit the Southland brought bouts of heavy rain to the area, saturating the ground and causing erosion underneath the highway.

The incident happened around 8 p.m. Friday while crews were responding to help the driver of a semi-truck after his vehicle tumbled down the highway because parts of it crumbled. 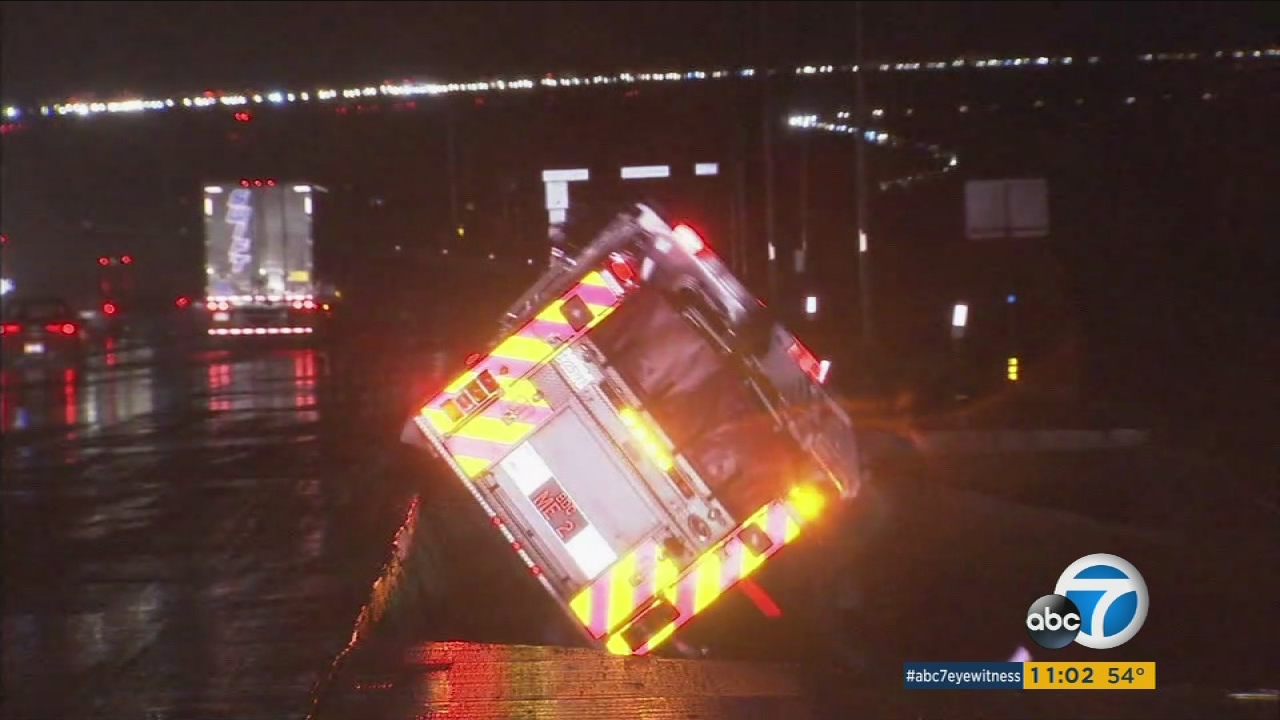 Fire truck falls over side of 15 Freeway; no injuries
A San Bernardino County fire truck fell over the side of the 15 freeway in the Cajon Pass when the rain-soaked roadway gave out. No firefighters were injured.
When the engineer stopped in the No. 5 lane to get out, he realized the roadway felt unstable. He pulled over to the side, giving him and his fellow firefighters a chance to get out of the vehicle unharmed.

The crews were able to safely rescue the driver of the semi-truck.

The crew was on their way back to station No. 2 in Devore when they received the semi-truck distress call. Earlier they had helped rescue a driver trapped in a flash flood in the West Cajon Valley.

Caltrans crews continue to assess the damage of the pass and closed off three right lanes because they are unstable. Two lanes remain open to traffic.

On Saturday, salvage crews faced a choice between trying to hoist the fire truck back up to the freeway or bring it fully down into the muddy wash below. They brought it down, and then had to slowly tow it out through thick mud.
Related topics:
cajon junctionsan bernardino countycaltransi 15weatherroad safetyfirefightersstorm damageroad repair
Copyright © 2020 KABC-TV. All Rights Reserved.
RELATED