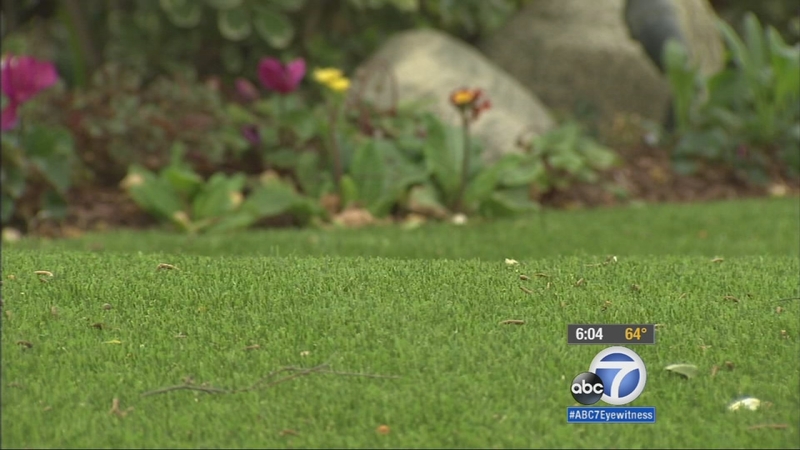 AGOURA Hills, Calif. (KABC) -- Rhonda and Greg Greenstein are being fined $50 a day by their homeowners association after installing artificial turf outside their Agoura Hills home.

They chose to replace their grass lawn, in part, because of California's drought.

"Its everyone's duty as a concerned citizen to do their part to save water," Rhonda Greenstein said.

The family, however, never asked for approval from the Morrison Ranch Estates Homeowners' Association before making the switch like they are required to.

"We really honestly did not think we needed homeowner's approval," Rhonda Greenstein said.

Before the Greensteins installed the turf, the homeowner's association sent them a "cease and desist" letter.

The association is taking the family to small claims court to try and recover more than $4,000 in fines.

"We have to enforce the rules here. Unfortunately, sometimes people don't like what the rules are," said Jan Gerstel, the president of the Morrison Ranch Estates Homeowners' Association.

Gerstel said the board considered changing its rule regarding artificial turf in the past, but voted against it.

"About eight months that we researched (artificial turf), we did not find significant water savings with artificial turf," he said.

Greg Greenstein said he never has to water his artificial turf.

"We project that we'll save 2/3 of our water bill throughout the end of the year," Greenstein said.

California Assemblywoman Lorena Gonzalez, D-San Diego, is sponsoring a bill in Sacramento that would take away authority from HOAs.

"It's about saving water and making sure we reward responsible behavior and don't penalize people for it," she said.

Gonzalez said Gov. Jerry Brown has vetoed similar bills in the past, but she believes that this time will be different.

"I expect the Governor, given his commitment to changing behavior in this drought, probably will take a second look at it," she said.

Gonzalez said the bill should be before the Assembly in May.

In the meantime, the Greensteins are preparing to fight their HOA in court.