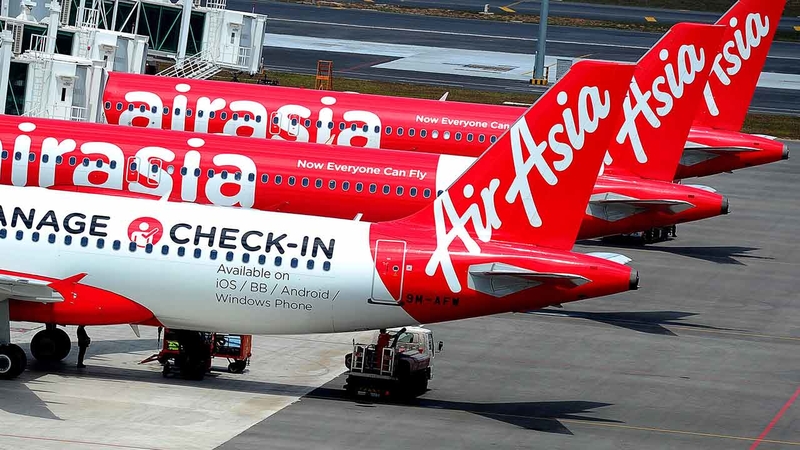 JAKARTA, Indonesia (KABC) -- Searchers "suspect" that the missing AirAsia jet carrying 162 people that disappeared Sunday morning on a flight from Indonesia to Singapore is on the bottom of the ocean.

"We currently suspect that plane is located on the ocean floor," Bambang Soelistyo, the head of Indonesia's National Search and Rescue Agency said.

The Indonesian Navy is leading the effort, but has received additional support from Singapore, Malaysia and Australia.

First Admiral Sigit Setiayana, the Naval Aviation Center commander at the Surabaya air force base, said that 12 navy ships, five planes, three helicopters and a number of warships were taking part, along with ships and planes from Singapore and Malaysia. The Australian Air Force also sent a search plane.

Flight QZ8501 from Surabaya to Singapore lost contact with air traffic control shortly before 6:30 a.m., the airline said in a statement.

The plane lost contact about 42 minutes into the flight, after the single-aisle jetliner took off from Indonesia's Surabaya airport, Hadi Mustofa, an official of the transportation ministry told Indonesia's MetroTV. The plane was believed to be over the Java Sea between Kalimantan and Java islands, Mustofa said.

According to Mustofa, the weather in the area was cloudy. AirAsia says the pilot was requesting a change in the flight plan, asking to go to a higher altitude because of approaching weather. That's when communication was lost, but no distress signal was received.

At the Surabaya airport, distraught relatives waited for news of their loved ones as helicopters, planes and ships looked for any sign of the missing jetliner.

More than 160 people were on board, including seven crew members and 155 passengers including 16 children and an infant. The airline says the majority on board were Indonesian. The airline did not have immediate updates regarding the passengers and crew.

AirAsia group CEO Tony Fernandes flew to Surabaya and said at a news conference that the focus for now should be on the search and the families rather than the cause of the incident.

"We have no idea at the moment what went wrong," said Fernandes, a Malaysian businessman who founded the low-cost carrier in 2001. He took to Twitter to express his sympathy and support for all involved.

I am touched by the massive show of support especially from my fellow airlines. This is my worse nightmare. But there is no stopping.

This is the third major air incident for Southeast Asia this year. On March 8, Malaysia Airlines flight 370, a wide-bodied Boeing 777, went missing soon after taking off from Kuala Lumpur for Beijing. To this day, it remains missing with 239 people in one of the biggest aviation mysteries. Another Malaysia Airlines flight, also a Boeing 777, was shot down over rebel-controlled eastern Ukraine while on a flight from Amsterdam to Kuala Lumpur on July 17. A total of 298 people on board were killed.

Malaysia-based AirAsia has a good safety record and had never lost a plane before.