KABC
By Rob McMillan and ABC7.com staff
SAN BERNARDINO, Calif. (KABC) -- An arrest has been made in a hit-and-run crash that killed a 2-year-old boy in San Bernardino.

The child, identified as Jonathan Montes, was struck by a driver Sept. 1 on Perris Hill Road near Base Line Street. He died a couple days later.

The suspect was identified Wednesday as 54-year-old Jose Vasquez.

The boy's uncle said the impact threw Jonathan more than a 100 feet into the roadway and he suffered multiple injuries, including a fractured skull. The 2-year-old was playing catch with a friend at the time.

Authorities said Vasquez lives in the same neighborhood as the boy. They said the car the suspect was driving, which he does not own, was caught on a nearby church's surveillance camera.

Detectives said they checked the area and found the car believed to have been involved in the deadly crash. They said the vehicle had front-end damage consistent with a collision with a small boy.

When asked why he did not stop, Vasquez allegedly told investigators he was "afraid."

"Had he stopped, things could have been very differently, and now he's facing felony charges, where the charges if he was at fault could have been much less or maybe even none, depending on who is at fault and what the conclusion of the investigation will yield," CHP Officer Brian Alvarez said.

The CHP said the driver was likely going 40 mph in a 25 mph zone. Officers said Vasquez does not have a valid California driver's license. 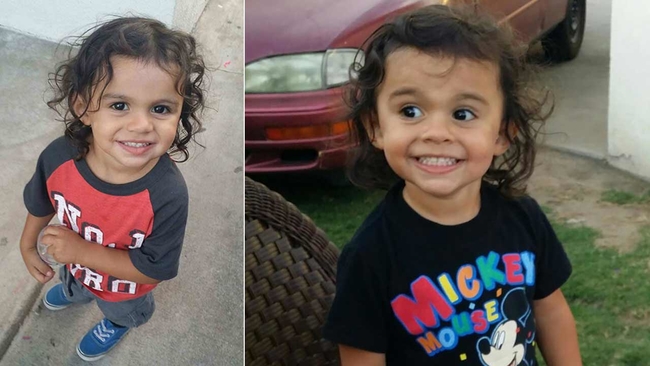