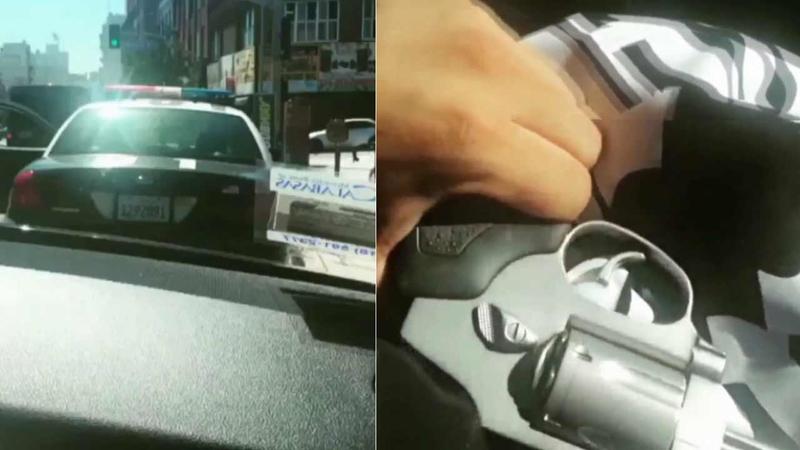 LOS ANGELES (KABC) -- An arrest warrant was issued by the Los Angeles Police Department Tuesday for a suspect who was allegedly seen flashing a handgun while recording a Central Division officer exiting his police cruiser.

The disturbing clip, which appeared on Instagram and was widely circulated on Twitter Thursday, has since been taken down.

In the video, the LAPD officer steps out of his black-and-white police cruiser, which is pulled over to the side of the road in an unknown area. The person shooting the video appears to be in a car parked behind him.

The recording then moves back to the police car, where it shows a uniformed officer get out and walk away. It's not clear when it was shot.

The department's robbery-homicide detectives say the unidentified officer belongs to the department's Central Division and that the three suspects, who were inside the vehicle when the video was recorded, have been identified.

"The investigation revealed that the film was made by members of an early 1990s rap group no longer in fashion. The film was made and posted on social media to ignite a comeback by the rap group," LAPD said in a press release on Tuesday.

Police have not released the name of the group or the names of the suspects.

During the L.A. Police Commission meeting on Tuesday, LAPD Chief Charlie Beck said a suspect was arrested in Downey over the weekend, but the primary suspect remains outstanding. Beck advised him to surrender.

One of the three men had a previous weapons conviction, the police statement said. An arrest warrant for carrying a firearm in a vehicle with a prior felony and a search warrant were served for him Tuesday morning, police said.

Robbery-homicide detectives say the video was made for entertainment purposes only and did not pose a credible threat to law enforcement.

Anyone with information on this case was urged to contact robbery-homicide detectives at (213) 486-6850.