KABC
By Rob McMillan
BEAUMONT, Calif. (KABC) -- One by one, three former city of Beaumont officials walked into a courtroom Thursday to face public corruption charges.

"The first time I met Mr. Kapanicas he lied to me, and he hasn't stopped since," said Judy Bingham, a Beaumont resident.

Bingham says she's waited years for this day. But the three defendants in court aren't the only ones charged with embezzlement.

"They, hopefully, will be held accountable," Bingham said.

The suspects have been charged with stealing nearly $43 million in taxpayer money and funneling it back into their own businesses. The group faces charges ranging from embezzlement of public funds, misappropriation of public funds, conspiracy and conflict of interest.

Activist Libi Uremovic says in her opinion, the dollar figure is a lot higher than that.

"There is another $350 million missing that the DA doesn't have the staff to prosecute for," Uremovic said.

"What I would challenge the district attorney to do is to show me the money," Kassel said.

He says his client doesn't fit the profile of someone guilty of embezzlement.

"I normally see opulence, someone driving in Lamborghinis, having a multitude of homes. He's in an 1,800-square-foot house with a subcompact car, that's not what you would see," Kassel said.

In the early 1990s, city officials brought in Urban Logic Consultants principals Dillon, Egger and Moorjani to serve as heads of the planning, economic development and public works departments, according to the Riverside County District Attorney's office.

Authorites suspect Kapanicas, Aylward and Aklufi, who gained their city positions at the time, used the positions' influence to funnel work into their own companies.

The three defendants in court had their bail significantly reduced from $5 million to $1 million. Their arraignment was continued until May 26. 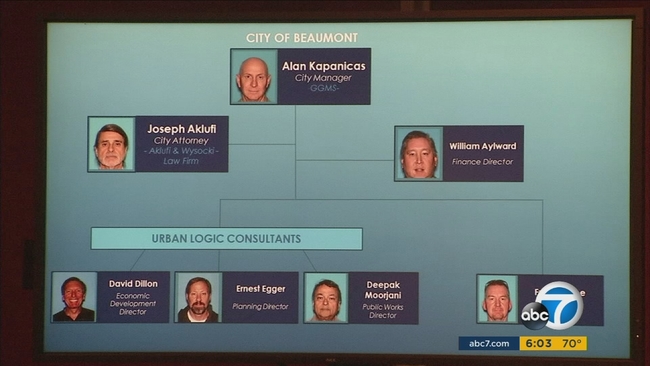