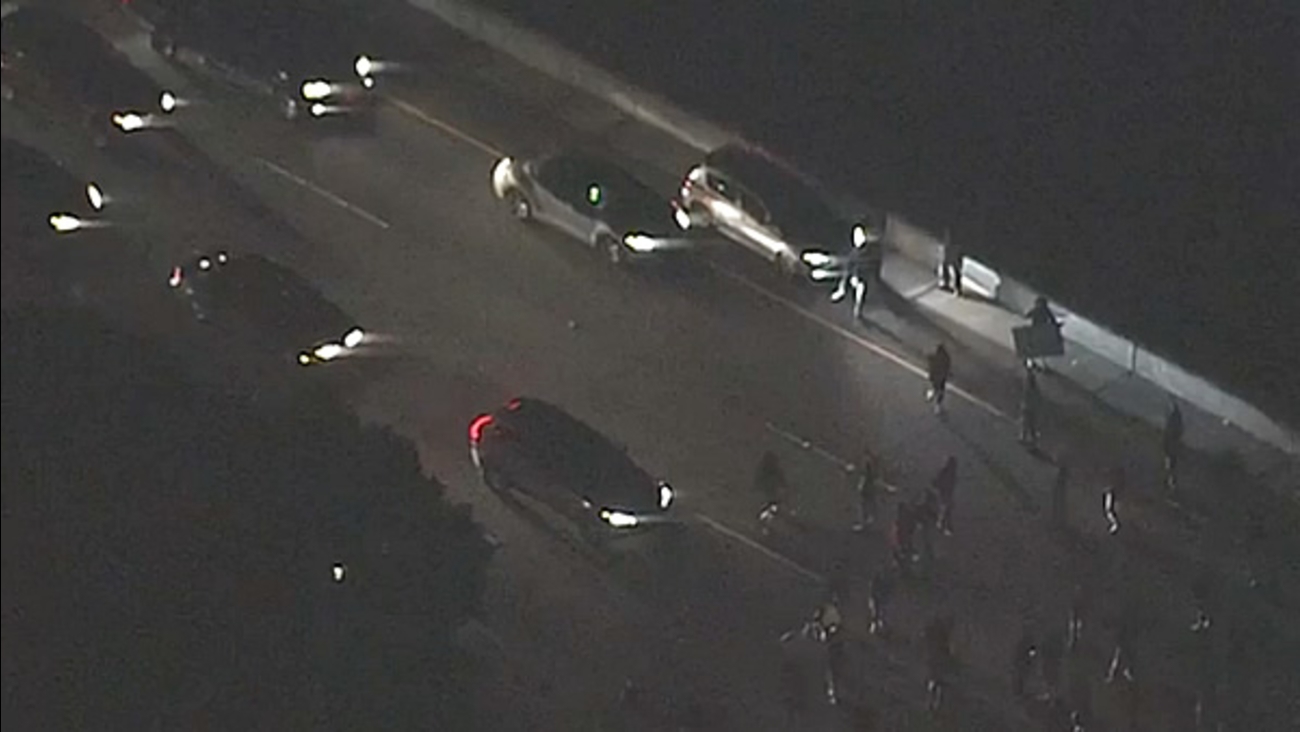 BERKELEY, Calif. -- Hundreds of people marched from Berkeley to Oakland Sunday for the second night of demonstrations against a grand jury's decision not to indict a police officer in the chokehold death of Eric Garner.

There were reports of some demonstrators throwing explosives at officers and assaulting each other. A group of demonstrators blocked all eastbound lanes of Highway 24 near 52nd Street at 8:45 p.m. in Oakland.

#Explosive thrown at officers. Gas has been deployed.

Sunday's protest began peacefully on the University of California, Berkeley campus. But as protesters marched through downtown Berkeley towards Oakland, someone smashed the window of a Radio Shack. When a protester tried to stop the vandalism, he was hit with a hammer, Officer Jennifer Coats said.

This is a protest that organizers insisted would be peaceful. Many were angered by the tactics used by police Saturday night.

After protesters made their way onto Highway 24 in Oakland and blocked traffic, the California Highway Patrol said some tried to light a patrol vehicle on fire and threw rocks, bottles and an explosive at officers. Highway patrol officers responded with tear gas.

The highway patrol said it was making arrests but no figures were available.

Reports and photos on Twitter showed demonstrators standing in front of buses and blocking traffic in Berkeley.

Protesters at Bancroft & Telegraph have stopped traffic in the intersection. Stopped a bus from passing. pic.twitter.com/qDfFbYYnNm

Protesters tonight could be heard yelling, "Fist up, Fight back," and "Turn it up, don't turn it down. Shut it down for Michael Brown."

Coats said at least one business owner has reported someone spray-painted their business during the march tonight.

On Saturday night, three officers and a technician were hurt and six people were arrested when a similar protest turned unruly. The most serious injury was a dislocated shoulder, Berkeley police said.

The demonstrations were the latest of several in the Bay Area - and the nation - in recent days to protest grand jury decisions in Missouri and New York not to indict while police officers in the deaths of two black men.

Seven people were arrested in Seattle Saturday night after protesters threw rocks at police and attempted to block a highway. Politicians on both sides of the aisle have been calling for calm while activists push for police reforms. NAACP president Cornell William Brooks, appearing on CBS' "Face the Nation," called for outfitting police with body-worn cameras and changing law enforcement policy.

"We have to change the model of policing," Brooks said.

Ohio's Republican governor said the unrest underscores the need for political leaders to be inclusive and to unite, not divide.

Ohio Gov. John Kasich said on ABC's "This Week" that a "significant percentage" of the country believes the system's not working for them and can be working against them.

"They need to be listened to and they need to be responded to," Kasich said. "In our country today, there's too much division, too much polarization - black, white; rich, poor; Democrat, Republican. America does best when we're united."

On Saturday night, protesters broke away from a peaceful demonstration and began throwing rocks, bottles and pipes at officers.

Scores of law officers from several surrounding agencies joined the Berkeley Police Department in trying to quell unrest that went on for hours.

Coats said several businesses on University Avenue were vandalized, including Trader Joe's, Radio Shack and a Wells Fargo Bank branch. She said demonstrators threw wrenches, smoke grenades and other objects at officers, and some squad cars were damaged.

She said officers attempting to get the crowd to depart used tear gas.

"Several dispersal orders have been given, and the crowd has ignored the orders. In response to the violence, officers have utilized tear gas and smoke in an effort to disperse the crowd," she said.

Local media reports said about 300 to 400 people participated in the relatively peaceful demonstration before splinter groups broke off.

The San Francisco Chronicle reported that at one point, the marchers were face to face with a line of about 100 police in riot gear who turned the crowd back.

The newspaper said that it wasn't just protesters who were hit by tear gas.

Several concerts had let out from downtown sites and concertgoers waiting to pay in a nearby garage were enveloped in a cloud of stinging gas, sending them running into elevators.

Protesters had planned to march from the University of California, Berkeley, campus to Oakland's Civic Center.

KGO-TV contributed to this story.