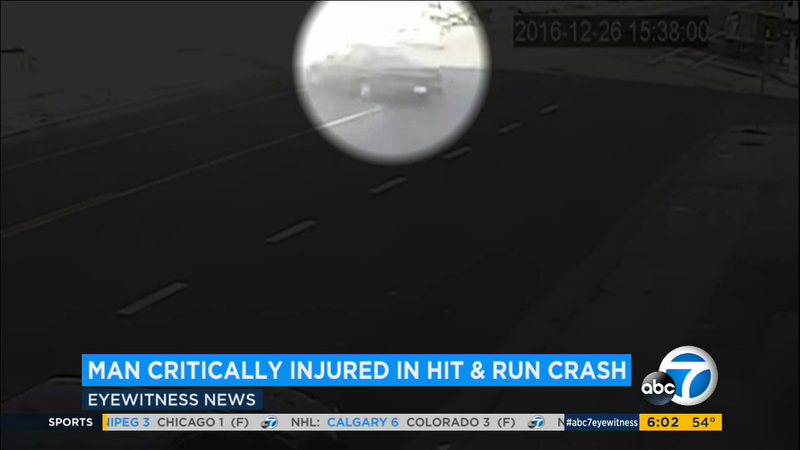 HYDE PARK, LOS ANGELES (KABC) -- Police have released surveillance video of a hit-and-run crash in South Los Angeles that left a man critically injured after his motorized bicycle and a turning car collided.

The incident was reported about 3:40 p.m. Monday at the intersection of 48th Street and 9th Avenue in Hyde Park, where responding officers found the 35-year-old victim on the street, according to the Los Angeles Police Department.

Detectives determined the man was riding the bicycle westbound on 48th when the driver of a red or burgundy Oldsmobile Cutlass sedan made a left turn in front of him, the LAPD said in a statement. The vehicle's model year is believed to be 1997 to 1999.


"The driver failed to stop, identify himself and did not render aid to the victim as required by law," the news release said, adding that a passenger was also in the car.

Los Angeles Fire Department paramedics responded to the scene and transported the bicyclist to a hospital, where he remained in critical condition Tuesday, authorities said.

Meanwhile, LAPD investigators made public two videos in an attempt to identify the sedan's pair of occupants. The footage shows the crash and, separately, the two men inside of a store.

The driver is described as Hispanic, about 5 feet 8 inches tall, weighing between 180 and 200 pounds, with dark hair. He was seen wearing a gray baseball cap, gray jacket, white T-shirt and blue jeans.

The passenger is said to be Hispanic, about 5 feet 8 inches tall, with black hair and a mustache. He wore a red long-sleeve shirt, black pants and brown shoes.