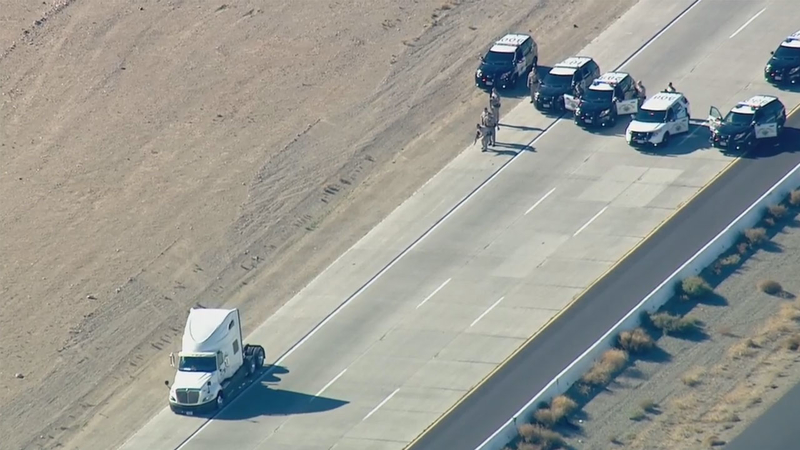 BARSTOW, Calif. (KABC) -- A man driving a tractor-trailer cab allegedly kidnapped his wife and led California Highway Patrol officers on a stop-and-go chase on the 15 Freeway in Barstow on Monday.

Around the same time, CHP officers said a woman called 911 and told the operator that her friend was inside the cab of a tractor-trailer being driven by her husband. She had gone to retrieve her belongings when the cab took off. A pursuit ensued.

According to CHP, the woman got out of the cab at some point during the chase. Investigators did not provide further information about how the woman was able to escape.

The vehicle came to a stop on the 15, but when CHP officers began approaching with their weapons drawn, the driver slowly inched forward. CHP deployed a spike strip, but the cab continued this stop-and-go pattern until around 9:40 a.m., when the vehicle stopped for the final time with its front tires blown out.

After using non-lethal force to shatter the cab's window, officers opened the door and pulled out the suspect, who appeared to need medical attention.

CHP Officer Ryan Camara said before the cab's window was shattered, the suspect was injured from a self-inflicted wound, which pierced his skin. The type of weapon used was not known.

The suspect was transported to an area hospital. Authorities later identified him as 36-year-old Ralph Broesche.

The woman involved in the incident spoke to CHP investigators. Police said the two had separated on Saturday following a domestic violence incident in Riverside County.

The 15 Freeway was shut down in both directions due to the chase. The southbound side reopened around 9:45 a.m. while the northbound side remained closed for the investigation. All lanes have since reopened.
Related topics:
barstowsan bernardino countypolice chase
Copyright © 2021 KABC-TV. All Rights Reserved.
More Videos
From CNN Newsource affiliates
TOP STORIES