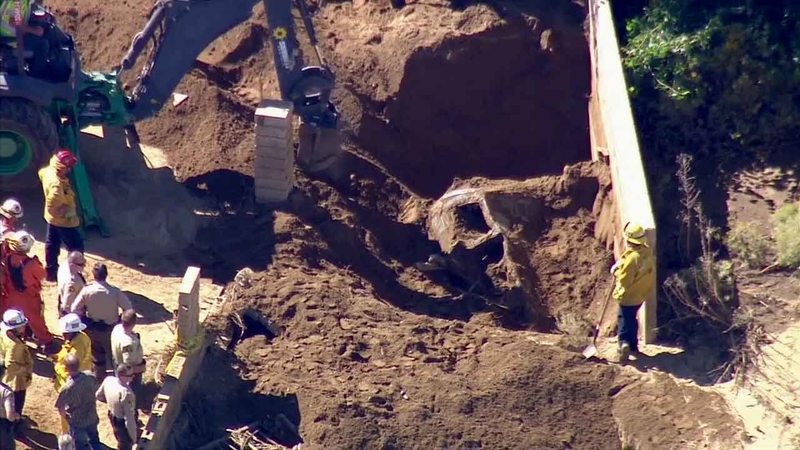 PALMDALE, Calif. (KABC) -- A body was found inside a car buried in mud in Palmdale Tuesday after last week's severe flooding, officials with the Los Angeles County Sheriff's Department confirmed.

A bulldozer and hand crews arrived at the scene near Karen Drive and Avenue M-8, where the black vehicle was found upside down and tilted sideways in a retention basin at 12:49 p.m.

Crews worked to dig out the car trapped under 6 feet of mud. Earlier while digging, they made the horrifying discovery.

"They discovered what appeared to be a human hand protruding from the vehicle," said Lt. Victor Lewandowski with the L.A. County Sheriff's Department.

AIR7 HD happened to be over the very spot in Palmdale on Thursday as flash flooding trapped drivers.

"It was quite a traumatic experience," Donna, who did not provide her last name, told Eyewitness News Tuesday night.

Donna, who was a passenger in a red car on Thursday, witnessed a dark van go underwater.

"It floated for about five minutes and then disappeared, and it was just very scary," Donna said.

"We told them a car had gone over and that he was under the water," Donna said.

Monica Hoffman of Palmdale took pictures of the flooding on Thursday.

"It was like a foot of water," said Hoffman. "It looked like rapids going down our street."

"It was probably one of the most terrifying things I've ever dealt with," said Sean Garcia of Quartz Hill. "There was no control. You couldn't get away from it."

The sheriff's department says it was too dangerous for fire crews to try and rescue the buried vehicle on Thursday, and then no one ever reported the driver missing.

"We never would have thought there could be a car below," said Heiner. "It's the worst thing I've ever seen in my life, to be honest."

The frantic dig started on Tuesday when a public works employee trying to clear the road discovered the vehicle.