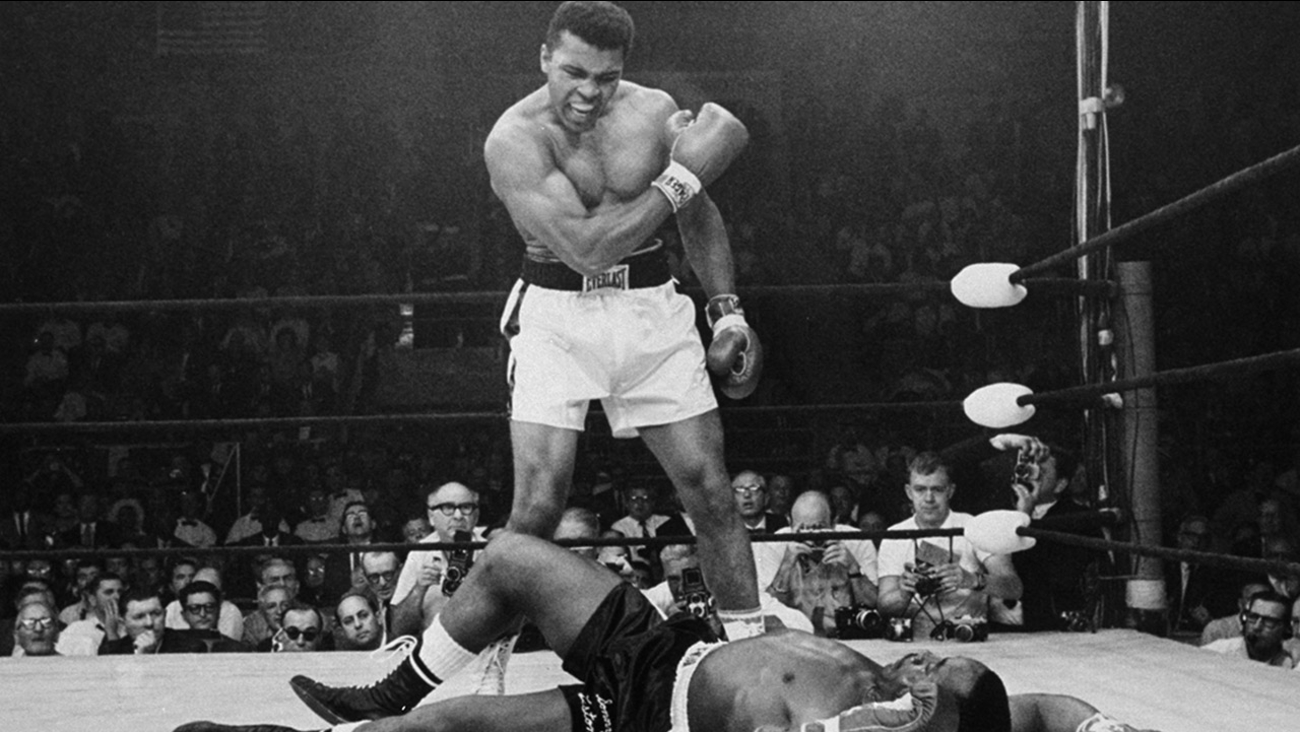 Muhammad Ali stands over fallen challenger Sonny Liston, shouting and gesturing shortly after dropping Liston with a punch on May 25, 1965, in Lewiston, Maine. (John Rooney)

PHOENIX (KABC) -- Boxing legend Muhammad Ali has died at the age of 74, according to a statement released by his family.

Ali was hospitalized in the Phoenix area as family members gathered by his bedside on Friday.

The iconic sports figure was fighting respiratory issues that were complicated by the Parkinson's that he was diagnosed with in the 1980s, The Associated Press reported. Ali had been hospitalized several times in recent years.

Ali's family said his funeral would be held in his hometown of Louisville, Kentucky. In a statement, Ali's family thanked the public for the outpouring of support.

Louisville Mayor Greg Fischer ordered flags to be lowered to half-staff in Ali's honor. He also announced the city would hold a memorial for boxing legend Saturday morning.

To honor Muhammad Ali's life & work, flags at all Metro Government facilities will be lowered to half-staff at 10am pic.twitter.com/Qm5xjkk6qr

"A true great has left us. Muhammad Ali transformed this country and impacted the world with his spirit. His legacy will be part of our history for all time," Bob Arum, who promoted 26 of Ali's fights, said in a statement.

Perhaps the most recognized person in the world, Ali will be remembered for iconic victories over Sonny Liston, Joe Frazier, and George Foreman. Standing at 6-foot-3 and 210 pounds in his prime, he also claimed the gold medal for light heavyweight in the 1960 Olympics in Rome, Italy.

Ali famously thundered, "I am the greatest," and stated he would, "float like a butterfly, sting like a bee."

Considered to be one of the greatest boxers ever, Ali fought his way to 56 wins during his career, 37 by way of knockout. He was the first boxer to win the heavyweight title three times.

Ali's life outside the ring was just as enchanting, and controversial, as his career inside it. Ali, born Cassius Clay, changed his name when he joined the Black Muslims.


He also defied the draft at the height of the Vietnam War in 1967, stating, "I ain't got no quarrel with those Vietcong." Ali was subsequently banned from boxing for three years after refusing to join the U.S. Army.