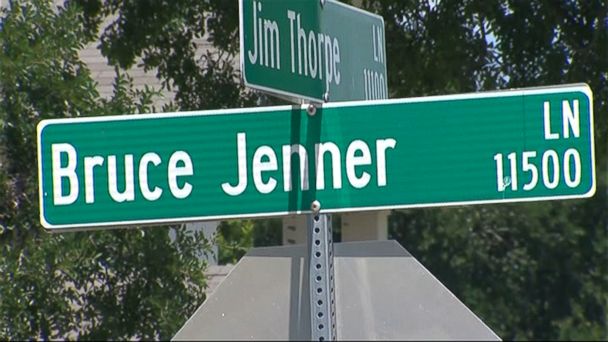 After Caitlyn Jenner asked the world to "Call me Caitlyn" on the cover of Vanity Fair, residents of Bruce Jenner Lane in Austin, Texas, are now wondering if they should do just that by changing the name of the street.

"Should we put both [names] on there? Tape one underneath it?" resident Ray Briggs told ABC affiliate KVUE. "I thought about doing that myself."

Briggs and dozens of other homeowners are part of Olympic Heights, a South Austin neighborhood with streets all named after famous Olympians.

Some residents remain reluctant to change the name of the street even though they support Jenner's transition.

"I don't care what [she] did with [her] life because that's [her] personal choice," one resident told ABC News. "But I'd rather not change the street name. That's just a lot of paperwork, you know?"

In order to officially change a street name, at least 50 percent of the residents on the street have to sign a formal petition to Austin approving the new street name, and the city council must approve it as well, according to the city's website.

"If the city council and residents of our community want to change the name of Bruce Jenner Lane to Caitlyn Jenner Lane, the board has no issue," Olympic Heights' board members told ABC News today in a statement. "However, it is something as a board, we are not actively pursuing."

The city of Austin did not immediately respond to ABC News' requests for additional comment.