Six defendants in all -- deputies, sergeants and lieutenants -- stand accused of obstructing a federal investigation into brutality and corruption inside L.A. County jails, which are run by the Los Angeles County Sheriff's Department.

Carter described to jurors how the discovery of a contraband cell phone at Men's Central Jail in August of 2011 went from "not that big of a deal" to something one defendant called "the important investigation in LASD history."

What changed? Sheriff's Department investigators had linked the smuggled cellphone to the FBI and learned it was part of their federal civil rights investigation at the jail. FBI agents had recruited inmate Anthony Brown to become their informant. Brown would use the smuggled cellphone to report to his FBI handlers in real-time and document any brutality he witnessed by jail deputies.

Once the phone was found and Brown's cover was blown, high-level meetings were convened, policies were rewritten, and unlimited overtime was authorized for a team of deputies tasked with guarding the inmate 24 hours a day, seven days a week.

Carter told jurors: "They wanted to clean their own house, keep their problems in their own dysfunctional family," echoing statements made by two of the defendants in recorded interviews played for jurors during the trial.

There is no real dispute in this case that inmate Brown was hidden, his name was changed and records were falsified. The question is why? What was the intent? Did the six defendants conspire to keep Brown away from his FBI handlers, and stop or delay his testimony before a federal grand jury? Or were they simply trying to guard Brown against possible retaliation from deputies and inmates who might view him as a snitch?

"The defendants declared war on a federal grand jury investigation," Carter stated. They knew about subpoenas related to deputy brutality had been served on the department, they knew the FBI had told Sheriff Lee Baca the cellphone belonged to the FBI, they knew a federal court order to turn Brown over was likely in the works.

"Anthony Brown was not moved and guarded for his own safety," Carter told the jury. The defendants were afraid, Carter said, that a federal investigation would "open up a Pandora's Box -- troubles would be exposed and the LASD would look bad." The argument that Brown was moved for his own safety "does not hold water."

Former federal prosecutor Miriam Aroni Krinsky has been following the trial and says the prosecution made good use of the numerous recordings the defendants themselves made during the operation.

"When you look at the audiotapes of the kinds of disparaging statements that were made to witnesses, the threats of an FBI agent, it's hard to not come away convinced that at least one of the purposes was to obstruct the FBI's investigation," says Aroni Krinsky.

By late August 2011, "the witness tampering was in full swing," according to Carter, who argued the defendants wanted to discourage witnesses from cooperating with the FBI.

In one recorded interview, Sgt. Scott Craig can be heard telling Deputy Gilbert Michel that the FBI is "screwing with you," and "is going to manipulate you like you're a (expletive) puppet." Jurors heard Craig giving Michel a direct order: Do not talk to the FBI.

Sgt. Maricela Long can be heard in another recorded interview with inmate Anthony Brown. The inmate told the defendants the FBI had promised to "come back for him" as they were being "kicked out" of Men's Central Jail.

"And they haven't come back for you," Long said to Brown. Carter told jurors that Long's statement "drove a wedge" between Anthony Brown and his FBI handlers. Brown later wrote a letter declaring that his cooperation with the FBI was over, that he believed the FBI had "left him for dead."

Sgts. Long and Craig each face an additional count of making false statements to the FBI. More than a month into the dueling investigations, the two sergeants confronted Marx outside her home. In the videotaped encounter, Craig can be heard telling Marx she is a "named suspect in a felony complaint" and that he is "in the process of swearing out a declaration for an arrest warrant."

Later that night, Sgt. Long received a phone call from Marx's FBI supervisor, Special Agent Carlos Narro. Long recorded the phone call, and told Narro that Marx could be arrested as soon as the next day. Just after the phone call ends, Long can be heard laughing and telling Craig "they're scared," before Craig points out the tape recorder is still on.

In previous grand jury testimony, both Long and Craig admitted they knew those statements were lies, that they did not have probable cause to arrest Agent Marx. Long told the grand jury the purpose of the encounter with Marx was "to threaten her," "regardless of whether I had probable cause or not, that was what we were going to tell her."

Prosecutor Carter also focused in on conflicting testimony given by defendant Steve Leavins. The lieutenant changed his testimony about the date of a key meeting where U.S. Attorney Andre Birotte told Sheriff Baca to, as Leavins put it, "butt out" of their federal investigation. On Thursday, prosecutors put on a rebuttal witness to show Leavins was wrong -- that pivotal meeting had occurred a month later. The date is crucial because it means the LASD continued its own investigation of the FBI for more than a month after being told to "butt out."

"Leavins is trying to run from the chronology," Carter told jurors. "This defendant is trying to make things up." Carter said it "shows a consciousness of guilt."

Attorneys for three of the six defendants gave their closing arguments on Friday as well.

Leavins' attorney, Peter Johnson, told jurors that his client "conducted a good faith investigation" and there was no corrupt intent "in his heart and in his mind."

As for the Leavins' testimony about the date of that meeting? Johnson told jurors that Leavins' memory "is not the greatest" and he may have "merged together facts."

Johnson pointed to the numerous recorded interviews played during the trial. Leavins and the other defendants "recorded everything," an indication Johnson says, they believed they were conducting a lawful investigation.

And why, Johnson wondered, would Leavins consult with two county attorneys about the investigation if he were really trying to hide something? "This case is loaded with reasonable doubt," Johnson told jurors.

The attorney for defendant Gregory Thompson described the dueling investigations as a "turf war" between the LASD and the FBI.

"Can we agree that what you have is two overly masculine entities butting heads?" asked Kevin McDermott. Out of that dispute, McDermott says, his client "could be labeled a convicted felon for the rest of his life."

McDermott emphasized the chain of command in paramilitary organizations like the LASD and the importance of "obedience to orders." Testimony throughout the trial has shown that Sheriff Baca gave the initial order to isolate the inmate, keep him safe and investigate how the phone got into the jail.

"Is Greg Thompson supposed to ask Lee Baca or Paul Tanaka why? No, that's not his role," McDermott said.

McDermott got a laugh with a line that referred to a federal court order, known as a writ, to turn Brown over to the U.S. Marshals Service. Throughout the trial, it's never been clear if the LASD actually received the writ.

"If there is no writ, you must acquit," McDermott told jurors.

The last closing argument of the day came from Matt Lombard, attorney for Deputy Mickey Manzo.

"Mickey Manzo is not guilty, ladies and gentlemen," said Lombard.

Manzo "attended meetings and sat in on interviews", but his voice was rarely heard on the numerous recordings played in court.

In one recorded interview, Manzo can be heard saying, "I am officially lost."

In another recording, inmate Anthony Brown asks Manzo to bring him a trash bag to hold his legal papers.

"He's so low on the totem pole, Anthony Brown is ordering him around," Lombard told jurors.

Lombard portrayed his client as "the fall guy," a low-ranking deputy taking orders from his superiors -- orders that came from the very top of the Sheriff's Department.

"They want you to pass the buck to this man, this O.S.J. deputy of 5 years, who sat in on interviews and was present at meetings," Lombard said.

Attorneys for defendants Gerard Smith, Scott Craig and Maricela Long are expected to give their closing arguments on Monday. 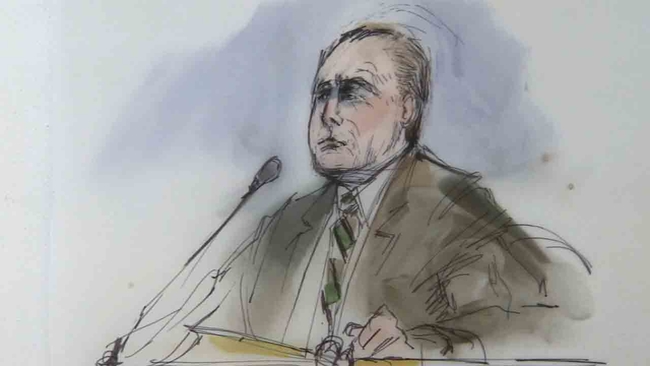