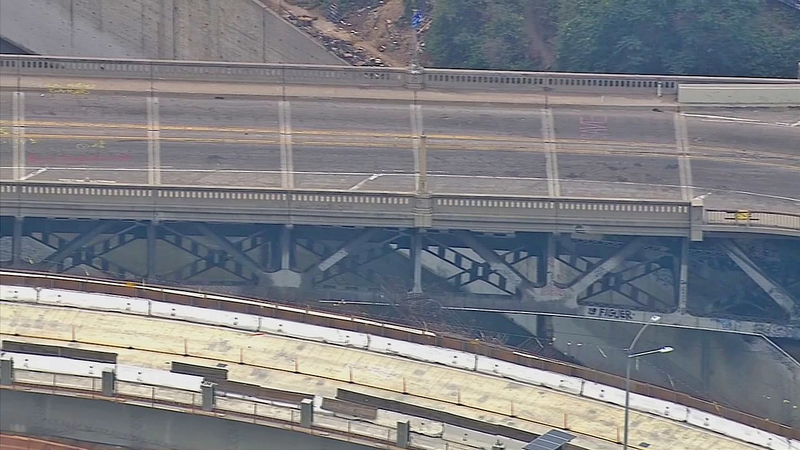 LOS ANGELES (KABC) -- It could be the end of the road for the Riverside-Figueroa Bridge, which is now closed to pedestrians and vehicles.

There is a new bridge to replace it. But, conservationists say the old bridge could be turned into an elevated park, an urban oasis above the L.A. River.

The Riverside-Figueroa Bridge was built in 1926. It achieved historic status about eight years ago. But that may be too late to save it, and it may be torn down in a matter of weeks.

The new Riverside Bridge is a $68 million, mostly federally funded project. City engineers say to preserve a portion of the old bridge near it would cost upwards of $25 million and would jeopardize the federal funding.

Tomas O'Grady of Enrich L.A. is one of the proponents who say saving the old bridge is possible, costing far less than the city says.

"This thing behind me is historic monument No. 908. It's beautiful, you can see the details, we think it can be saved and converted into a park, and this is a very poor area," O'Grady said.

Councilman Gil Cedillo, who represents the area, says those plans were considered.

The councilman says the new bridge will have lookouts and room for all modes of transportation.

"We have an alternative that's going to provide bike lanes, pedestrian passages, lookouts and then safe passages for vehicles," Cedillo said.

The proponents think the city is lacking vision, and a respect for the past. And some are ignoring the no trespassing signs to protest, because once they are gone, the old trestles and concrete cannot be replaced

"Just one more example of the city of Los Angeles giving up some of its most beautiful, historic structures, it's going to just be a very, very sad day," O'Grady said.

The old bridge was supposed to come down by now, but as long as it's still standing, proponents will work to convince the city it's a bridge to the future as well as the past.