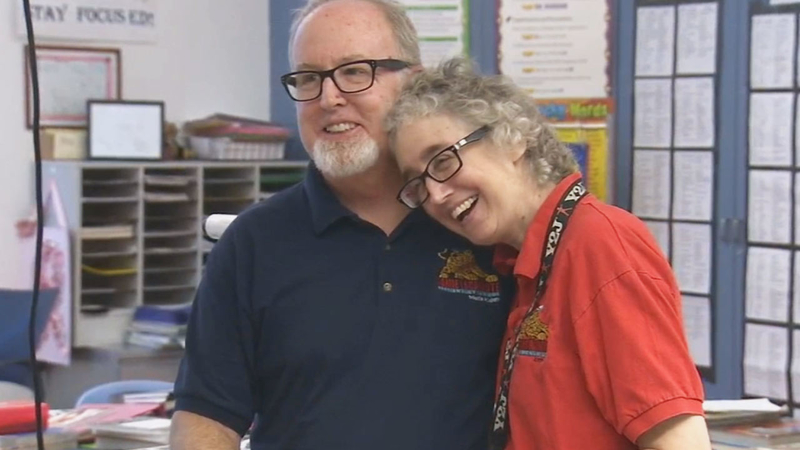 CUDAHY, Calif. (KABC) -- Teachers at an elementary school in Cudahy are showing their compassion by donating personal sick days to help a fellow teacher. That teacher is fighting breast cancer and running short on medical days.

Sixth-grade teacher Carol Clark is thrilled to be back in the classroom at Jaime Escalante Elementary School in Cudahy. Last year she missed all but two months of the school year after being diagnosed with breast cancer.

As a result, Clark had to use her vacation days, plus 120 sick days she had accrued during her 17 years with LAUSD for doctor appointments, chemotherapy and surgeries. But at the end of last year she realized she was in a pinch: She was out of sick days, and too ill to return to work.

"I lost pay, I lost my medical benefits, I lost all that stuff," said Clark.

That's when her husband, Dave Clark, also a teacher at the school, turned to their colleagues for help.

"Some of the people that donated money, I didn't even know. They were friends of friends of mine," said Carol.

That was enough for Carol to recover the pay she lost and bank plenty of sick days for additional surgeries she faces in the coming months.

"Just to give a day is just wonderful. And then for them to even say, 'I'm going to give more to Carol,' it just shows the heart of people and the generosity," said teacher Raquel Prado.

"Carol has given a lot of love to a lot of people. She doesn't realize it, but she has," said teacher Justine Gurrola.

The overwhelming generosity has left Carol and her husband emotional and speechless.