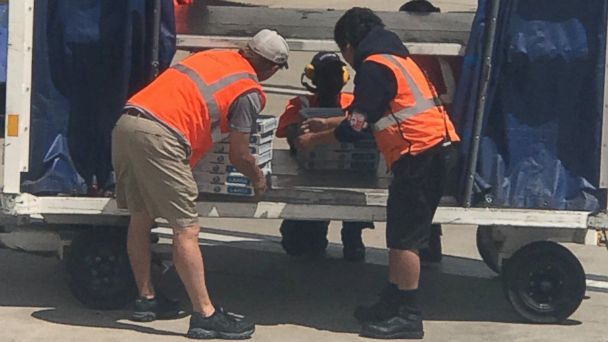 Delta Air Lines purchased pizza for passengers on Wednesday after it canceled hundreds of flights because of severe thunderstorms in the South.

The airline said it ordered more than 700 boxes of pizza for some customers who were affected by weather-related cancellations and delays at airports in Georgia, Tennessee, Louisiana, Ohio, Kentucky and elsewhere.

The food deliveries came after the airline canceled some 300 flights, according to ABC affiliate WSB, because of severe weather in the Southeast that brought tornado warnings to some areas.

Some of the displaced passengers posted pictures on Twitter, showing flight attendants and crew members handing out slices on planes.

The company could not say exactly how many pizzas it gave out, but it said several of its airport operations in the Southeast were involved.

Delta, which is based in Atlanta, said it also provided games, coloring books and other items to "keep younger travelers entertained while they waited for storms to clear."

One Twitter user who was stranded in Nashville for more than two hours, according to a tweet from the user, thanked the company for the gesture.

The company has gone the extra mile for stranded passengers at other times.

Last year, during a power outage that led to some 2,000 flight cancellations, the airline gave passengers doughnuts, pizza and free liquor, WSB reported.