KABC
By Rob Hayes and Lisa Bartley
RANCHO PALOS VERDES, Calif. (KABC) -- It shouldn't take a medical degree to tell the difference between an X-ray of a human being and a dog.

The tail should have been a giveaway.

To be fair, Dr. Richard Seongjun Kim, of Rancho Palos Verdes, did look a little befuddled as he stared at one dog's X-ray. But then he declared to the human in front of him, "It looks like it's your chest actually."

Who says Drug Enforcement Administration agents can't have a sense of humor?

"We didn't want to trick the doctor in any way into prescribing medications, so we really set off fairly blatant red flags," says Special Agent Keith Bridgford of the DEA.

Those red flags included a skateboard-riding, vape-smoking "patient" who bragged to Dr. Kim about taking steroids, sharing his prescription meds and tried to pass off an X-ray of a dog as his own.

"It's clearly not a human being," says L.A. County Deputy District Attorney Emily Street. "It was an X-ray of the rear end of the dog, and you could actually see the tail."

Kim found himself on the DEA's radar in fall 2014 after agents received a tip that Kim was prescribing painkillers and other controlled substances without a legitimate medical purpose.

DEA agents and their confidential sources set up a series of appointments with Kim at his clinic in Rancho Palos Verdes. There was no white doctor's coat, no stethoscope, no staff. The office was in disarray. Appointments were set up directly with Kim via text message.

On the very first visit, the confidential source walked out of Dr. Kim's office with prescriptions for Norco, Xanax, Soma and Ultram.

"No examination, no vitals, nothing resembling the practice of medicine," Street said. "They talked about everything under the sun, except for any kind of medical ailment this undercover may or may not have had."

"I don't ever want to be in a situation where I snap and there's anything like a butter knife. I really think I could take out a lot of people," Kim tells a confidential informant.

But it's not his girlfriend Kim has to worry about these days. That's because he's locked up at Men's Central Jail, serving a three-year sentence that will be followed by two years of mandatory supervision.

Kim was convicted in September on 17 felony counts of unlawfully prescribing controlled substances without a legitimate need.

Street said she believes the motive was money. DEA agents seized about $64,000 in cash from Kim's apartment. Kim described to DEA agents how his business had spiraled from a successful family practice to a cash-only operation. 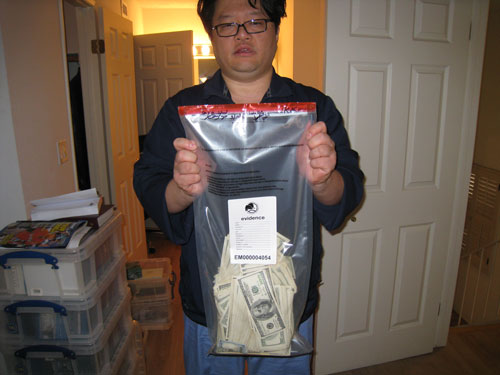 DEA agents say they seized about $64,000 in cash from the apartment of Dr. Richard Seongjun Kim of Rancho Palos Verdes.

"Just because someone is wearing a white coat doesn't mean that what they're doing is any less dangerous than someone dealing on the street corner," Street tells Eyewitness News.

The DEA threw up red flag after red flag with Dr. Kim, but nothing seemed to stop him from doling out prescriptions.

"In the first month alone, this first confidential source had received - without any examination at all - almost a thousand pills that were controlled substances - in one month alone," says Street.

And the red flags kept coming. Kim asked the confidential sources to bring some kind of medical record. Aside from the dog X-rays, one brought in a urine test that should have raised an alarm with Kim.

"The urinalysis showed positive testing for a slew of different drugs," says Special Agent Bridgford. "Cocaine, positive for opiates, as well as THC."

"This is positive for THC, so I may not keep that," Kim says in the undercover video.

"He didn't want it in his file because that would be something that could get him potentially caught by the DEA," Street tells Eyewitness News.

On the fifth and final visit, another confidential source shows up to an appointment with an undercover female DEA agent. The undercover agent has no appointment, but tells Kim she's a stripper and she's sore from too much dancing on the stripper pole.

"I told him I was a dancer and that it's basically like working out all the time," says the undercover agent. "He did not touch me or try to examine if I had any pain."

On that visit, the DEA agent and the confidential source walked out with prescriptions for Norco and Xanax - totaling 290 pills.

Kim did not perform any physical examination, but he did offer this insightful medical question.

"Is it really necessary to have a pole?" Kim asks the undercover DEA agent. "Have you ever thought about that?"

Kim's medical license was restricted by a court order in July 2015. Now that he's been convicted, the California Medical Board says they will file an accusation to revoke his medical license.