Doctors say children should beware of marijuana-laced candies on Halloween 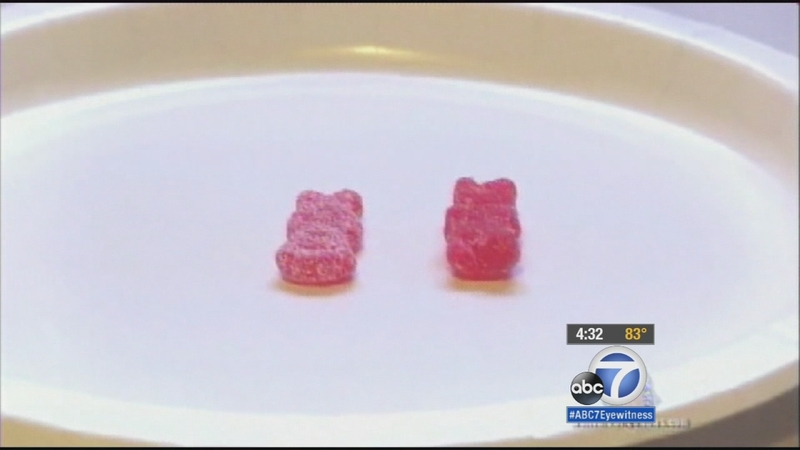 LOS ANGELES (KABC) -- There is concern that some Halloween treats could land kids in the emergency room, and doctors are seeing a growing hazard.

The problem is candy that is sold at marijuana dispensaries appear similar to real candy.

There is no difference because dispensaries spray THC - the chemical responsible for marijuana's psychological effects - onto the popular items and then repackage them.

When the candy is out of the package, they appear identical. The marketing is mainstreaming medical marijuana use and raising the rate of overdoses, according to Dr. Stephen Kishineff, an ER doctor at St Joseph's Medical Center.

An awareness campaign is in full swing by the San Fernando Valley Partnership. The hazard is the high concentration of THC that is sprayed on, according to Alberto Melena with the Partnership. A single gummy bear equals one marijuana cigarette, according to a dispensary label.

"We've spoken to community members, we've spoken to law enforcement. We're seeing more cases of children accidentally ingesting these products at school and being rushed to the hospital," Melena said.

The Partnership wants the word out to children to stay away from any candy that is not sealed in its original packaging. But it's teens who overdose more often, Kishineff said.

The symptoms of ingesting too much THC are vomiting, hallucinations and paranoia, which have led to self-destructive behavior for some cases in Colorado. The symptoms may kick in within 30 minutes to an hour after ingesting the marijuana edibles.
Related topics:
marijuanasafetychildrenhalloweenfoodteenagersfood safetycandy
Copyright © 2021 KABC-TV. All Rights Reserved.
TOP STORIES
LAUSD to require COVID-19 testing for all students, staff
CDC document warns Delta variant spreads as easily as chickenpox
Garcetti signs plan to restrict homeless camps
Lakers to acquire Russell Westbrook, ESPN reports
Man beaten outside NoHo hookah lounge says attack was a hate crime
Great Park dropping reference to Orange County in its name
Dodgers finalizing deal to acquire Scherzer, Turner
Show More
TSA teaching airline workers to defend themselves
Mother, infant ejected from vehicle in Torrance crash
Video: Fight breaks out on 60 Freeway in Ontario after crash
How to convince someone to get the COVID-19 vaccine
Downtown LA venues welcoming back concert fans
More TOP STORIES News