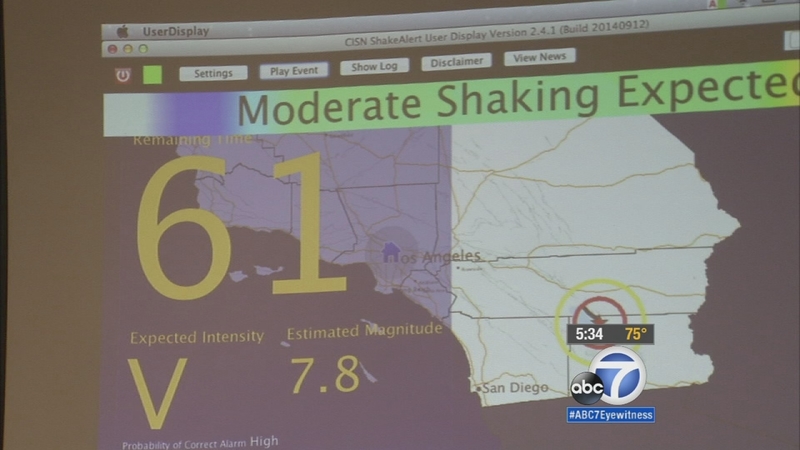 ShakeAlert is an early warning system created by scientists to let you know an earthquake is about to hit your area.

"We're having enough stations near all of our faults so we can tell that the earthquake has begun and send you that information before the shaking itself gets to you," seismologist Dr. Lucy Jones said.

This system is already installed in the emergency preparedness centers throughout Los Angeles. Some businesses have it as well. It has not been introduced to the public yet.

For the first time, it's been installed in a public school -- Eagle Rock High School -- which was destroyed in the Sylmar earthquake more than 40 years ago.

"What we have done is installed some prototype software on the science teachers' computers, so it will be going off in the science classrooms," Jones said.

Seismologists say science teachers will give them feedback on how efficient the system works in the classroom when small earthquakes trigger the early warning system.

"If it goes off for a magnitude-3, nobody else needs to know, but you can start seeing and start understanding how it works and give us that feedback about how it's heard," Jones said. "Of course, if it got to be a really large earthquake, I am sure somebody will go on the P.A. system and provide an announcement."

Teachers say they love having the system because it will allow students to study earthquakes along with having advanced warning when one hits.

"We can be more ready especially if it's kind of a far earthquake, like it doesn't happen too close to us because then it will be very little time," science teacher Sara Ramos said.

"If you're right on top of the earthquake, we're using the first wave, which is called the P wave, and it might only be a tenth of a second before the S wave comes up from depth and hits you," Jones said. "As you get farther away, it can be up to over a minute."

"If you can't run away from it then you just have to brace yourself for it, and this is the best way to do that," student Gabriel Owens said.

How close are you to having your own ShakeAlert? Seismologists say that depends on funding.