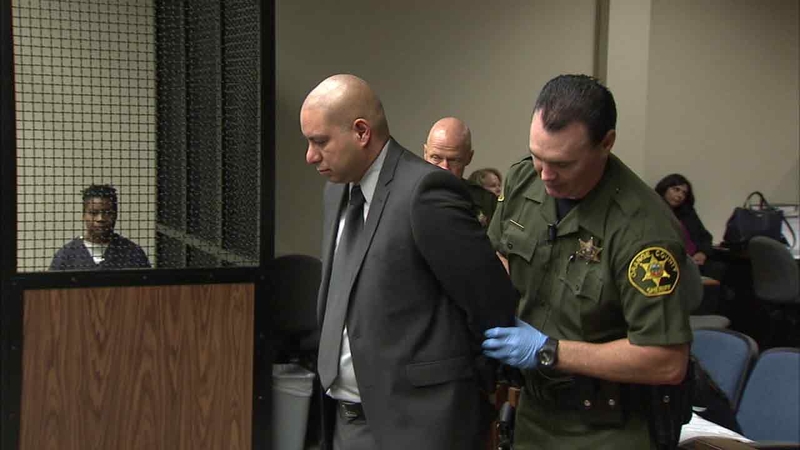 FULLERTON, Calif. (KABC) -- A former Los Angeles County sheriff's deputy was sentenced to one year in jail on Monday for beating his girlfriend and setting her hair on fire.

The Orange County District Attorney wanted Alejandro Flores to serve his time in state prison, but the judge overruled the request, sparking outrage from the victim.

While the formal sentence was for one year, Flores is expected to spend only six months in jail under state sentencing guidelines.

The 34-year-old stood emotionless as he listened to his son's mother speak about the violence.

"He pushed me against the stove yelling, 'Is this what you want?' At that point, he turned on the gas burner, setting the my hair on fire," said the victim, who did not want to be identified.

As she read her victim-impact statement, she urged the judge to issue a stiffer sentence.

"Alejandro chose a career in law enforcement to protect and serve. Apparently, that doesn't cross to his personal life and the sentence confirms it," she told the courtroom.

The victim said there had been violence before, all of which occurred in front of their young son.

Flores pleaded guilty to nine felony counts, including using a gun to threaten his then girlfriend not to leave after the violence.

The victim said her close encounter with death that day gave her strength to leave and report abuse.

The maximum sentence for all of the charges against Flores was 14 years in prison. The DA offered him five years, but Judge Rodger Robbins gave him five years formal probation with him actually serving six months in county jail.

Flores was relieved of duty from the sheriff's department in July 2015.

In her victim impact statement, the victim also urged the judge to consider what message the sentence sends to other victims of domestic violence.

"Knowing what it finally took for me to finally stand up for myself and my son, with a one-year sentence it is almost like I'm being victimized again, now too by the system I trusted to protect me and my son," she said.
Related topics:
fullertonorange countysentencinglos angeles county sheriff's departmentabusebeatingdomestic violence
Copyright © 2021 KABC-TV. All Rights Reserved.
TOP STORIES
Woman safe after video of possible abduction in Bell Gardens
Willie Garson, known for 'Sex and the City,' dies at 57
Mega Millions ticket worth $432 million sold in New York
Who is running for mayor of LA? Here are the top contenders
Paychecks delayed for hundreds of Santa Ana school district employees
Amazon, Chobani and others vow to hire Afghan refugees
Fire captain severely burned in DTLA explosion sues building owners
Show More
Car crashes into Orange gas station at high speeds
Body found confirmed to be Gabby Petito, death ruled a homicide
5.9-magnitude earthquake hits near Melbourne, Australia
Series of small earthquakes hit Anza area
Woman found dead in freezer ID'd as former LA County detective
More TOP STORIES News