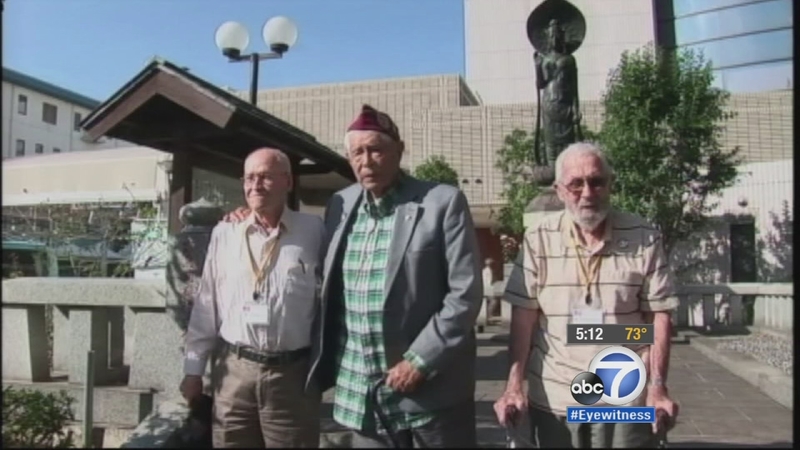 MONTEREY PARK, Calif. (KABC) -- Bill Sanchez from Monterey Park is 96 years old. He was in his 20s when he arrived at Camp Omori. He used to watch American B-29 bombers fly by as they bombed nearby Tokyo at the end of World War II. His job was to build up the island in Tokyo Bay and the Omori Prison Camp on it.

"All this land you see was reclaimed by us, the American prisoners of war and the British prisoners of war, and I'm amazed at how well they have used the land," Sanchez said.

Sanchez was joined on his tour by two other POWs - one is also from California.

Jack Schwartz, 99, is a Caltech graduate. He was taken prisoner in Japan in 1941, but was in a different camp than Sanchez.

"I didn't have good memories, but this program, I think is very wonderful," Schwartz said. "It's bringing more friendship."

Three men, brought together, all with a common bond. They arrived in Japan on Sunday and plan to visit various places to reflect on their wartime memories.

"It helps to make balance better between the two countries when you do meet like this, and I am glad I did," Schwartz said.

The group was invited by the Japanese government under a program that began five years ago. The men also met Japanese lawmakers and the U.S. Ambassador to Japan, Caroline Kennedy.

They're expected to visit Kyoto later this week to sightsee, before heading back to the U.S. on Monday.