Family member of hit-run victim in Hyde Park speaks out

HYDE PARK, LOS ANGELES (KABC) -- The brother of a man critically injured by a hit-and-run driver in Hyde Park spoke publicly Wednesday, delivering a message for all motorists.

Hasan was riding his motorized bicycle westbound on 48th when the driver of a red or burgundy late 90s model Oldsmobile Cutlass sedan made a left turn in front of him. They continued driving, never stopping to check on or help Hasan.

"I just wish that they would have stopped. Period," the victim's brother, Jibrail Hasan, said.

Surveillance videos, which were released two days later, captured the crash and the suspects at a convenience store.


Hasan was taken to County USC Medical Center, where he underwent heart surgery after his aorta was crushed in the crash.

Authorities said Javier Saravia, 48, is the suspected driver and was arrested on Dec. 30 on suspicion of felony hit-and-run. The car that they say was involved in the crash was found in a carport in the back of Saravia's residence and impounded.

Saravia's arrest was thanks in part to tips received from the public after the release of surveillance videos. He faces several years in prison if convicted.

"The driver of the car failed to stop. He failed to identify himself and he failed to render aid to the injured party," LAPD Detective Kitty Yount said. "I could not have made an arrest as quickly as I did if it wasn't for the help of the citizens that got involved."

Jibrail Hasan said his brother is in the ICU, fighting for his life and surrounded by family. The 35-year-old is a tattoo artist and well-known in the community for his work building motorized bikes, similar to the one he rode on the day of his accident.

Mikail Hasan is also the father of nine children. His brother had a message for motorists.

The LAPD also said hit-and-run cases are on the rise and are using Hasan's case to remind motorists to never leave the scene of an accident.

Saravia was released after posting $100,000 bail. He is scheduled to appear in court on Jan. 25. The tipsters who helped police find him will receive reward money for their assistance. 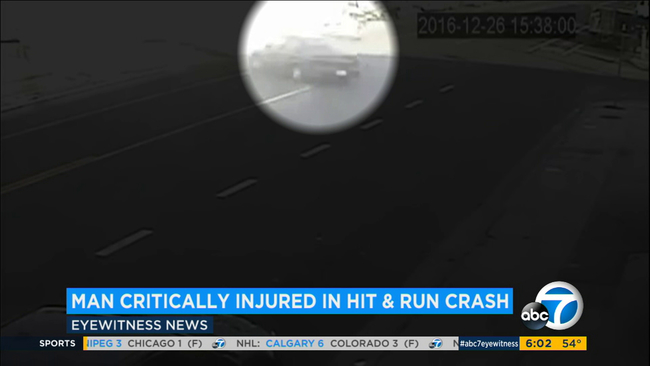