KABC
By Amy Powell
ROWLAND HEIGHTS, Calif. (KABC) -- Family members say 58-year-old Victor Gallegos was walking home from the store when he was struck and killed by a hit-and-run driver in Whittier.

"We just lost our hero. He was the pillar of our family," said Jose Gallegos, the victim's son.

The accident happened around 9 p.m. Saturday as Gallegos crossed the street in the area of Pickering Avenue near Hadley Street.

Whittier Police Lt. Kent Miller says witness saw a white Toyota Tacoma hit a pedestrian. They followed the suspect's vehicle and were able to get photos and other details about the truck.

On Sunday, a Hacienda Heights resident called authorities after spotting a suspicious vehicle in her neighborhood. Police found blood and evidence of a collision on the vehicle and identified the owner as 30-year-old Randy Marquez.

Marquez is being sought as a "person of interest."

"If it was an accident, that's one thing. I could forgive that," said Jose Gallegos. "But that was no accident."

Gallegos' wife of 26 years says he served in the Army as a combat medic and was a proud veteran.

"Victor was kind and caring and loved everybody that he met," said Gloria Gallegos.

Police and the family are hoping the hit-and-run driver will surrender.

"We want justice," Jose Gallegos said. "We want this to come to an end and be able to bury my father in a proper way."

Anyone with information on the driver was urged to contact the Whittier Police Department at (562) 567-9240.
Related topics:
whittierlos angeles countyhit and runpedestrian struckman killedveteran
Copyright © 2021 KABC-TV. All Rights Reserved.
RELATED 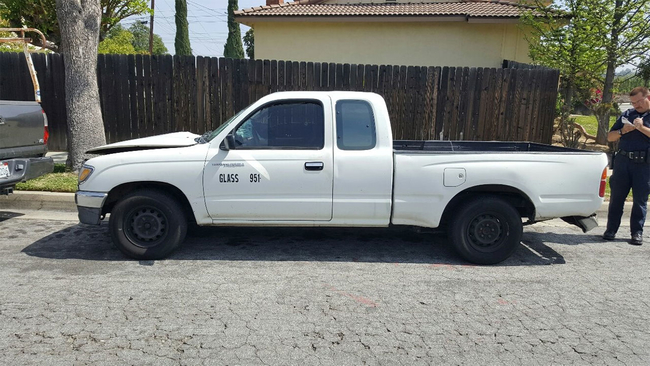