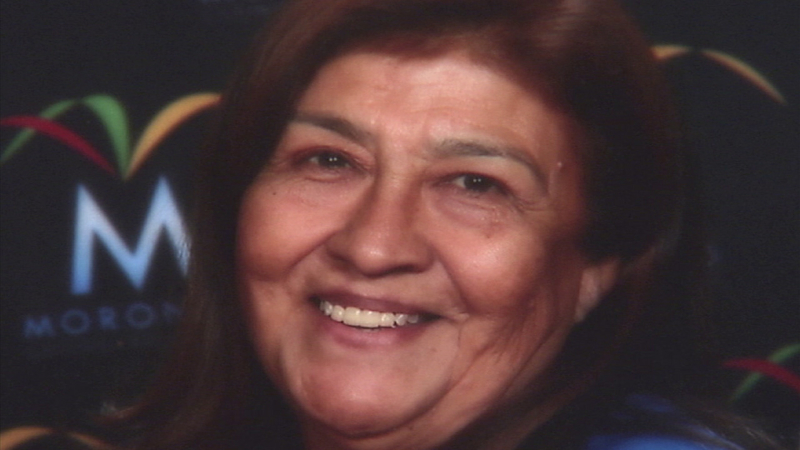 BOYLE HEIGHTS, LOS ANGELES (KABC) -- The family of a grandmother who was shot by a gunman who police said went on a shooting rampage while "binging on cocaine" in Azusa on Election Day spoke publicly for the first time.

Dominguez's sons, Carlos and Art, have been by her hospital bedside since Tuesday.

"She's strong and she's a fighter and we're all praying that she pulls through," Carlos Dominguez said.

Elidia Dominguez had just cast her ballot in Azusa and was walking home when she was struck by a bullet.

Detectives said Mendez was high on cocaine when he stepped outside his home and began shooting at cars.

He critically injured a woman driving, then walked up to his neighbor, 77-year-old Bill Varney, and gunned down the beloved long-time resident.

Officers arriving at the scene shot and killed Mendez. Two nearby polling places were placed on lockdown during the incident.

Carlos Dominguez said he couldn't reach his mother and thought she was still under the lockdown. He later found out she was one of the two people critically wounded.

"What he did was wrong. Innocent people getting hurt, it just wasn't right. I don't care what a person's going through, you don't do it like that. You don't take out your anger like that," Carlos Dominguez said.

Carlos Dominguez said his mother wasn't able to talk yet, but had opened her eyes and knew her family was by her side.

He believed she'd fight to recover in order to be with her seven grandchildren and her husband of 45 years.

"You don't want to believe it. You see it and hear it and you don't want to believe it's one of your family members," Carlos Dominguez said. "This is just one of those things where she was at the wrong place at the wrong time."
Related topics:
boyle heightslos angelesazusalos angeles countycocaineillegal drugsmurdergun violencehomicideshootingguns
Copyright © 2021 KABC-TV. All Rights Reserved.
RELATED
Victim killed by gunman on rampage while 'binging on cocaine' ID'd
Gunman in Azusa rampage was "binging on cocaine," officials say
TOP STORIES
LA County issues order requiring all county employees to be vaccinated
Corona shooting suspect blames voices in his head
Judge's tentative ruling says Newsom may link recall to GOP
Dixie Fire engulfs NorCal town, leveling businesses
Moderna COVID-19 vaccine remains 93% effective for up to 6 months
3.5-magnitude earthquake strikes Hemet area, USGS says
Target to offer debt-free college degrees to 340,000 US employees
Show More
LA to consider requiring vaccination to enter public indoor spaces
Man steals truck after getting out of Glendale jail, police say
Driver kills 91-year-old woman in South LA, flees scene
10 killed when van crashed into pole near border, DPS says
Child under 12 among new COVID deaths reported in LA County
More TOP STORIES News