Family shot at in Pomona during road-rage attack

Family shot at in Pomona during road-rage attack

POMONA, Calif. (KABC) -- Authorities were searching for three suspects after a gunman opened fire on a family during a road-rage attack in Pomona on Sunday.

Police said the incident began at about 7:30 p.m. when a blue Toyota Corolla made an abrupt U-turn in front of an SUV with a family of five inside.

The mother of the family, who asked to not be identified, said her husband had to slam the brakes to avoid a collision with the Toyota and honked the horn.

She couldn't believe what happened next.

"They just started following us. Then they followed us for like a minute or so and that's when they pointed a gun at my husband and that's when I called the cops," she said.

The mother said the driver opened fire, shooting at their SUV twice after trying to ram their vehicle as several witnesses watched.

"They didn't hit our car, but we thought they had hit somebody else or something," she said. "I was really scared, especially because of my kids."

Police said no one was hit, but now they were searching for the three suspects in a blue 2001 four-door Toyota Corolla with tinted windows.

The family said they got the license plate number, but according to investigators, the car was sold and there was no record of the new owner. 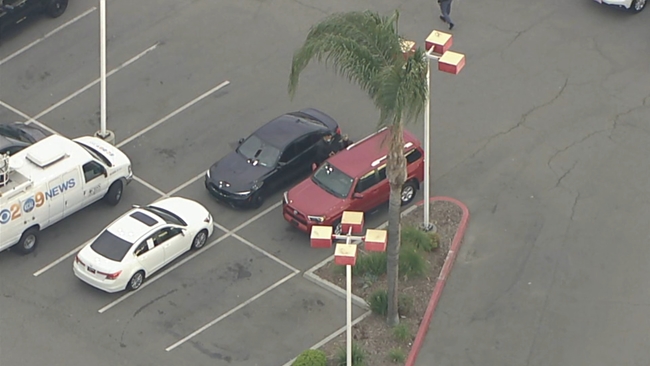