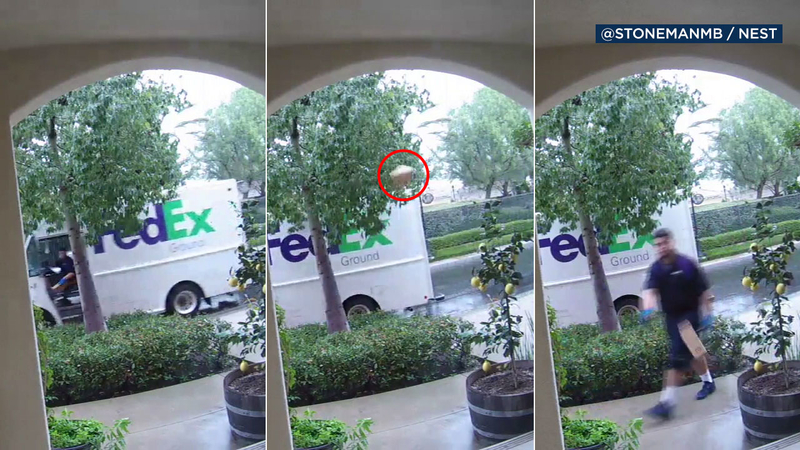 IRVINE, Calif. (KABC) -- Adam Stoneman is fed up with FedEx.

The Irvine resident on Wednesday caught on video a driver for the delivery service carelessly throwing a package from his truck and bouncing it off the wall of his house, rather than walking it to his front door.

In the video, the driver is seen pulling up to Stoneman's house and staying behind the wheel of his truck. The box flies through the air over Stoneman's yard and hits the side of his house.

The driver apparently realizes he missed the porch and then gets out of the truck, retrieves the box and again tosses it, this time toward the front door.

A FedEx driver is captured on video pulling up to an Irvine home, throwing a package from his truck and then retrieving the box and carelessly tossing it onto the porch.

Stoneman was home at the time and heard the loud thud hit his house. He looked out the window just in time to see the driver pick up the box from the bushes and toss it on the porch.

He can be heard on the video shouting from his window at the driver.

"Why'd you do that, man?" he again asked the driver. "You don't know what that is in there. It could be glass."

Stoneman said the driver first denied throwing the box, then said he didn't initially get out of the truck because he was tired and had a lot to do.

"I opened the window and asked him if he had thrown it onto my front steps and he said no," Stoneman said in an interview with Eyewitness News. "Then when I pressed him a little bit he said he was sick and tired and had a lot to do, so he didn't want to get out of his truck."

The video was sent to ABC7 via #abc7eyewitness.

Stoneman said he doesn't yet know what is inside the box or if it was broken. It was addressed to his wife and just in case it was a present for him, he isn't opening it until she can take a look first.

FedEx has already contacted Stoneman and is looking into the incident.