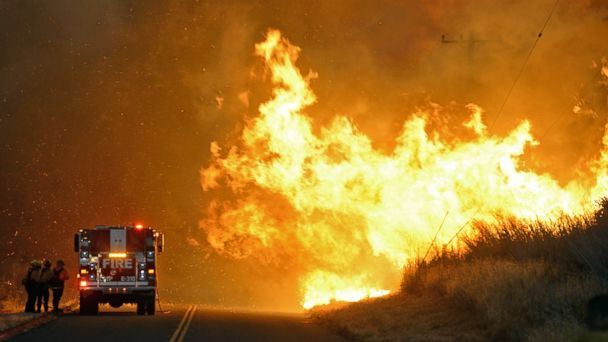 Hundreds of firefighters are scrambling to contain several wildfires that have broken out across three Southwestern states caused by hot and dry weather.

Blazes in California, Arizona and New Mexico threatened communities with thousands of residents where hundreds of homes have been evacuated so far.

Dubbed the Sherpa Fire, the blaze quickly spread with the help of strong winds in the area. About 800 firefighters, who are dealing with a steep and rugged terrain, had not contained any portion of the fire as of Thursday evening.

About 140 homes and ranches were potentially at risk.

More than a dozen homes have been damaged or destroyed in the Manzano Mountains of central New Mexico, where firefighters struggled to make progress against a blaze that erupted across 25 square miles, burning 16,000 acres and forcing residents of several small communities to flee.

The New Mexico National Guard has been activated to help fight the blaze, known as the Dog Head Fire, which still remained uncontained on Thursday, Gov. Susana Martinez announced.

The fire became so large that a thick haze could be seen on social media covering the state's largest city of Albuquerque.

Communities from several counties were placed under a mandatory evacuation order as the flames raced northeast.

More than 5,500 acres burned in east-central Arizona, and a small community in the Cedar Creek area was evacuated. Thousands more were told to prepare to leave after the wildfires ravaged more than 12 square miles.

The fire broke out Wednesday 12 miles south of Show Low. But officials said crews made good progress as they were holding down the containment lines Thursday.

The Show Low community remains pre-evacuated, not mandatory, according to the Navajo County Sheriff's office.