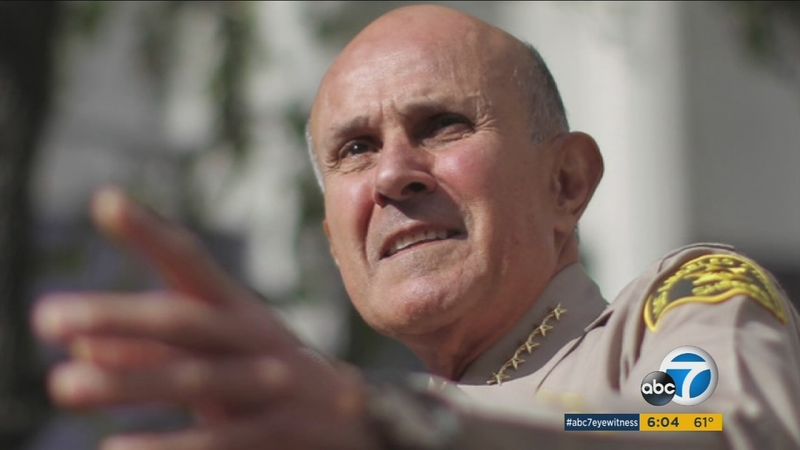 LOS ANGELES (KABC) -- Who polices the police? That crucial question has hung over two weeks of testimony in the federal corruption trial of former Los Angeles County Sheriff Lee Baca.

Should the Los Angeles County Sheriff's Department police itself, as Baca has repeatedly said?

"Ultimately, there's only one entity that polices the police - and that's you," prosecutor Brandon Fox told jurors shortly before they began deliberations Monday.

Baca has pleaded not guilty to charges of conspiracy and obstruction of justice. If convicted, the 74-year old former sheriff could face up to 15 years in prison.

In closing arguments, Fox told jurors that Baca's response to the FBI's probe of Men's Central Jail was "dirty from the beginning." The LASD "circled the wagons," and deliberately blocked the FBI's access to their inmate-turned-informant Anthony Brown, he said.

"No man is above the law," Fox emphasized to the jury. "As much as Mr. Baca tries to run from Undersheriff Paul Tanaka - he can't," said Fox.

The defense has contended that it was Tanaka - not Baca - who was running the show.

"This was his guy," said Fox says of Baca's "father-son" relationship with Tanaka. The former undersheriff has already been convicted and sentenced to five years in prison for his role in the obstruction.

Baca's defense? The sheriff was "out of the loop" and he assigned second-in-command Tanaka to sniff out what the feds were up to. Lead defense attorney Nathan Hochman told jurors it was Baca's practice to address complaints of jail abuse directly.

Sgt. Scott Craig: "Do you know that you are a named suspect in a felony complaint? Did you get that message?"

Shortly after that tense showdown outside Marx's home, an FBI supervisor calls the LASD to find out if Baca is aware of the confrontation with Marx.

FBI Supervisor Carlos Narro: "The sheriff knows about this?"

LASD Sgt. Maricela Long: "The sheriff knows about this, sir."

But the defense counters the sheriff did NOT know - and that's why Long then refers the FBI supervisor to Tanaka - instead of Baca.

Narro: "Can I ask what the charges are going to be?"

Long: "You'll have to call the undersheriff, and that's Mr. Paul Tanaka."

The prosecution told jurors that Long was simply following the chain of command and that phone logs show a flurry of calls between Baca and Tanaka after the FBI informant's cover was blown. Brown was moved repeatedly, his name was changed three times, and he was discouraged from cooperating with the FBI.

The defense portrayal? This face-off between the two powerful law enforcement agencies was like two brothers "pushing and shoving in the sandbox."

Over a six-week period in the summer of 2011, Baca "was stonewalled by the FBI and the U.S. Attorney's Office," the defense said. Baca got no answers to crucial questions. Were there more corrupt deputies accepting bribes? Could there be more contraband cellphones - or even drugs - inside the jail?

But suddenly someone was talking - the FBI's informant, Anthony Brown - and he claimed that yes, there were more dirty deputies. Some, Brown claimed, had even smuggled drugs to him behind bars.

Baca's defense calls that a potential threat to all of the deputies and civilians working inside Men's Central Jail.

The prosecution recounted for jurors Baca's angry statements in a high-level meeting with then-U.S. Attorney Andre Birotte Jr. and Steve Martinez, the head of the FBI in Los Angeles.

"I'm the goddamn sheriff... these are my goddamn jails," Baca told the feds in that heated meeting. This was despite Baca's own assistant sheriff telling him the FBI had every right to investigate county jails. Fox told jurors it was "Law Enforcement 101."

"We are the suspects," Assistant Sheriff Cecil Rhambo says he told the sheriff in testimony recounted by Fox on Monday. "Don't f--- with the feds."

Defense attorney Hochman reminded jurors that Baca is not on trial for inmate abuse. He questioned why did prosecutors keep telling the jury about incidents of excessive force in the jails?

"To poison your mind against Sheriff Baca," Hochman said.

For the first time, the actual cellphone used by Brown to communicate with his FBI handlers was displayed in court.

"This phone, in some ways, is the Pandora's Box," said Fox. "It caused all of the evils of Men's Central Jail to be aired for the first time."

Baca did not take the witness stand in his own defense. No matter the outcome of this trial, Baca is expected to face a second trial with a separate jury to determine if he lied to the FBI about his role in the conspiracy.

"The evidence is in... this case is in the hands of the jury and we're looking forward to a jury verdict," Baca's lead defense attorney Nathan Hochman told Eyewitness News outside court.

The jury deliberated for a little less than three hours Monday and will resume Tuesday at 8 a.m.