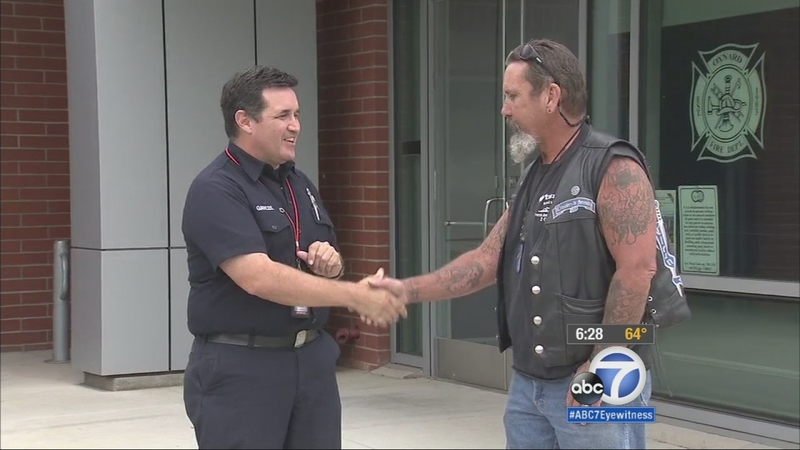 OXNARD, Calif. (KABC) -- Boyd Tarwater is being hailed as a hero after his quick thinking and training as a former U.S. Navy sailor saved a 22-year-old man from drowning at an Oxnard beach.

Tarwater, 55, rode his motorcycle to Mandalay Beach Monday to have a picnic when he noticed a man struggling to get out of a rip current and there was no lifeguard was on duty.

"His family came running up with their hands in the air and screaming," Tarwater said. "I started stripping my boots and my pants off. I'm just thankful the water wasn't all that cold."

Experts say rip currents are formed when waves break abruptly on the shoreline. A stream of water moving away from the beach can form and take swimmers with it.

"He probably would have drowned," Tarwater said.

Experts say if you get stuck in a rip current, don't panic and don't fight it. Instead, you should swim parallel to the shore.

Tarwater, who is certified in CPR, pulled the struggling man to shore and told other bystanders to call 911.

"I got him laid on his back and asked everybody to step away," he said.

Paramedics arrived within minutes and transported the man to a local hospital in stable condition.

Although Tarwater's former training prepared him to successfully save the man, firefighters said this story is the exception to the rule. According to authorities, the rescuer becomes a secondary victim that needs rescuing 80 percent of the time.

In this circumstance, however, rescuers were grateful for Tarwater's training and bravery.

"I'm not a hero. I'm just a normal guy who happened to be at the beach at the right time and did what needed to be done," Tarwater said.