KABC
By Jovana Lara and ABC7.com staff
LOS ANGELES (KABC) -- A local community came together in an effort to raise money for a man whose cart was destroyed in an act of violence caught on camera in Hollywood.

A heated confrontation on July 17 between a street vendor and a man walking his dog and a woman ended with a food cart overturned, spilling its contents onto a Hollywood street.

A video of the incident was recorded by the vendor, 26-year-old Benjamin Ramirez.

He said it was the fourth time he's had a run-in with the man and woman seen in the video.

The encounter happened around 6 p.m. Los Angeles police said it was initially reported as a battery, but officers investigated and classified the incident as vandalism.

Ramirez said he was simply trying to earn money to feed his family, adding that he had never been previously targeted in a similar incident.

He said he had been scared to come back to the spot after the confrontation, but on Tuesday, the vendor was surrounded by supporters who came to his father's food cart after seeing the video.

The sidewalk became crowded as people stopped to get food and strangers shared kind words.

"We appreciate having him here so I wanted him to know that not everyone is a big jerk," John Graff said.

Another man brought Ramirez 500 ears of corn and cash to help him with the loss of food and damage to his cart.

According to the Facebook event page, a fundraiser will take place at the Indie Brewing Company in Boyle Heights on Thursday. There is a suggested donation fee of $10 at the door.

Any funds raised through the event will be donated to the man to help him purchase a new cart and recover the cost of the food that was ruined.

Any funds that surpass the goal will be contributed to a fund established to support street vendors who face similar needs.

The organizers said it is their hope that the city of Los Angeles completes the process of legalizing street vending. In February, the city voted to decriminalize street vending, which means it will no longer be a misdemeanor, but authorities can still cite them.

Eyewitness News tried to contact the man who attacked Ramirez, but a building manager said to get off the property.
Report a correction or typo
Related topics:
los angeleslos angeles countyhollywoodassaultfoodcommunityfundraiser
Copyright © 2020 KABC-TV. All Rights Reserved.
RELATED 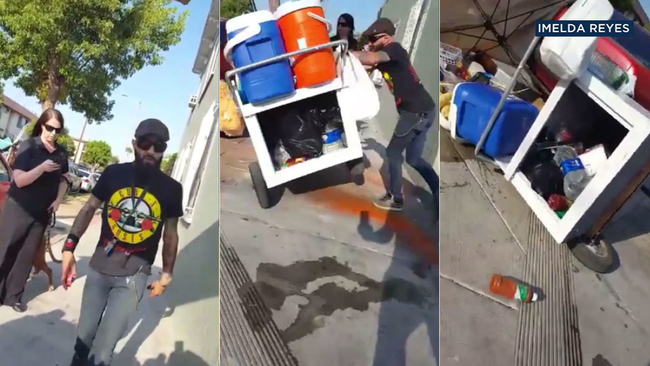