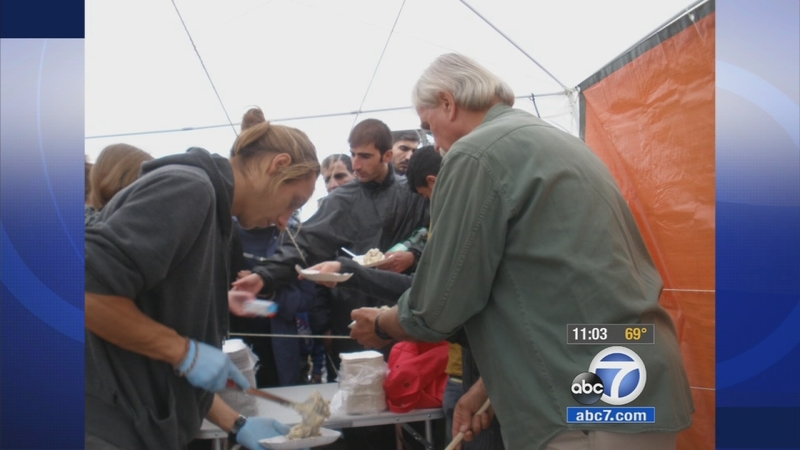 GARDEN GROVE, Calif. (KABC) -- Europe's refugee crisis is heartbreaking to watch and leaves many people wondering how they can help.

One Eyewitness News viewer just returned from volunteering with the Red Cross at the Serbia-Croatia border, and he brought home some incredible stories to share.

Bob Maukovich of Garden Grove left for Serbia about a month ago.

"This is my 21st year since the war in Bosnia going back to the country, trying to help those poor families," he said.

Maukovich was stunned when he witnessed the flood of migrants pouring into the small towns of Tovarnik and Bopska, fleeing the violence in Syria, Iraq and Afghanistan.

He volunteered with the Red Cross so that people on those buses would have food and water. Over the course of about a month, he captured how thousands of people, even newborns, waited to cross the border into Croatia -- most of them with the hopes of reaching Germany.

"I was real amazed the great attitude of the young people, many of them educated and just heading for a better life," Maukovich said.

According to some estimates, more than 250,000 people have died in the Syrian conflict since 2011.

Maukovich and his wife, Mariana, were moved to take action. She helps fundraise but is following the migrant crisis from home because of the toll it would take on her body.

"I literally was sick physically. I had a migraine headache," she said. "I empathize and sympathize, and I put my children and myself in their situation, and I can't imagine having just a backpack and everything is gone."

"What I want to help say to people who are watching is do something for others instead of just thinking for yourself," Maukovich said.
Related topics:
garden groveorange countyvolunteerismu.s. & worldred crosseurope
Copyright © 2021 KABC-TV. All Rights Reserved.
TOP STORIES
CDC document warns delta variant spreads as easily as chickenpox
Mother, infant ejected from vehicle in Torrance crash
Corona movie theater shooting suspect to appear in court Friday
ABC7's Adrienne Alpert signs off after 25 years at KABC
Pantages Theatre to require proof of vaccination for ticket holders
CDC mask decision followed stunning findings from Cape Cod outbreak
Biden to allow federal eviction moratorium to expire tomorrow
Show More
Man beaten outside NoHo hookah lounge says attack was a hate crime
Simone Biles and 'the twisties': How fear affects safety in gymnasts
LAUSD to require COVID-19 testing for all students, staff
What we know about the delta variant
Mom who gave birth to 9 thriving babies at same time speaks out
More TOP STORIES News