Eight people, including a 17-year-old girl, were injured in two separate shootings, police said. No arrests have been made.

The teenage victim and a 24-year-old man were shot in their car around 4:50 p.m. in the area of Vermont and Manchester avenues. The victims then drove about 10 blocks to the intersection of 77th Street and Hoover Avenue. Police said the 17-year-old girl is in critical condition and the male victim is in stable condition. The suspect vehicle was described as a silver or gray small SUV.

Six people were injured in another shooting just before 10 p.m. near 27th Street and Stanford Avenue. They were attending a candlelight vigil for a person who had died in a car crash the night before. Five of the victims were shot and the other was grazed by a bullet. They were all listed in stable condition at the hospital.

According to police, the victims do not appear to be gang members. Investigators say they are searching for a dark-colored van and possibly two suspects in the second shooting.

These are the latest in a string of violence in the area. Four people died in the Labor Day shootings. Lamont Jones, 33, and Mario King, 26, were killed at the Green Forest Car Wash on the 900 block of West Florence Avenue. James J. Smith, 20, was killed on the 2600 block of Dalton Avenue. Brittney Jene Barnett, a 25-year-old mother of three, was fatally shot in an alley on the 3600 block of Ninth Avenue.

Police are trying to see if there is a link between any of the shootings. Anyone with information was urged to contact LAPD at (877) LAPD-24-7. 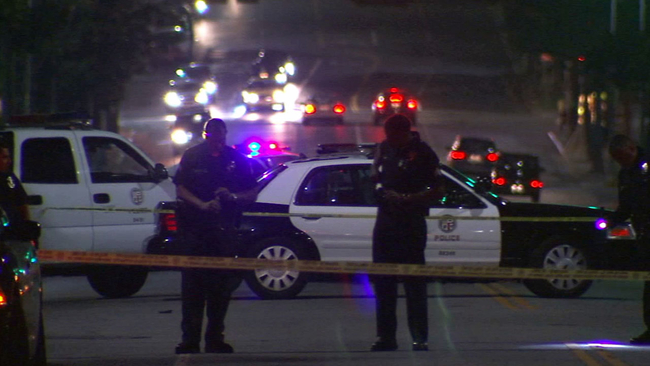