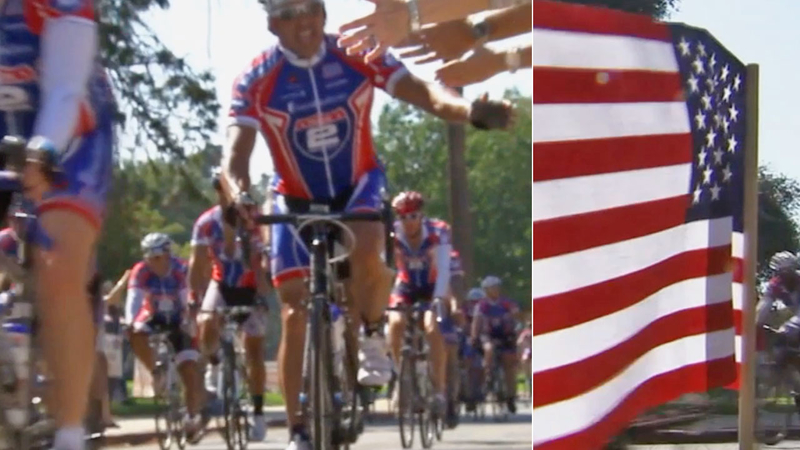 LOS ANGELES (KABC) -- While most bicyclists credit the sport with keeping them in shape, many veterans credit it with saving their lives, thanks to Ride 2 Recovery, a group created to promote cycling as an alternative therapy to PTSD, traumatic brain injury and physical rehab programs.

"The bonding and the teamwork was something that made me addicted to Ride 2 Recovery right away," said John Morlock, project manager of the Project Hero Hollywood branch of Ride 2 Recovery.

Morlock is a former Marine who now organizes rides through the organization Ride to Recovery, and Project Hero, whose goal is to improve the health and wellness of veterans, many of whom struggle after returning home from war.

"We're losing approximately 22 veterans a day that lose their battle with post-traumatic stress disorder. So any event they get in will try and get that number from 22 to zero," said Morlock.

Rides can be as short as just a few miles, or some, like the California Challenge, go from Sunnyvale in the Bay Area all the way to Los Angeles. And they work.

"By the end of the second day, where you've been riding with someone for seven, eight hours a day, and literally putting your arm around them, giving them words of encouragement, or physically pushing them up a hill, you've already had a bond for life," said Morlock.

That's what has happened with Jose Miranda who was injured in 2004 while serving in the Navy. After 3 years of surgeries and infections, he finally told the doctors to amputate his leg.

"I was in the O.R. every other day for six to seven months," said Miranda. "I just got tired of it."

Miranda began cycling two years ago using a hand cycle, then moved up to an upright bike using a prosthetic leg, and now, simply rides one-legged.

"At first I was like, 'This is crazy, it's not possible. I see people that have two legs and they're struggling. How am I going to do it with one leg?'" said Miranda.

But that's where the teamwork ingrained in a veteran's DNA comes in.

"That helping hand is always there," said Miranda. "That's what we all learn from Day 1, regardless of branches, is you don't leave anybody behind."

"It's very emotional," said Morlock. "Words can't describe it. You have to be out there to see it. They will literally push each other to get up a hill."

"Despite the fact that we all have something going on, whether if it's an amputation, whether you lost your vision, traumatic brain injury, we all relate to one another in one form or the other, and being banged up and messed up, you feel normal," said Miranda.

Ride 2 Recovery is open to all healing heroes, and they have made some special accommodations to make sure that is the case, from reclining bikes, to hand cycles, to one by that allows a blind double-above-the-knee amputee to ride his way to recovery.