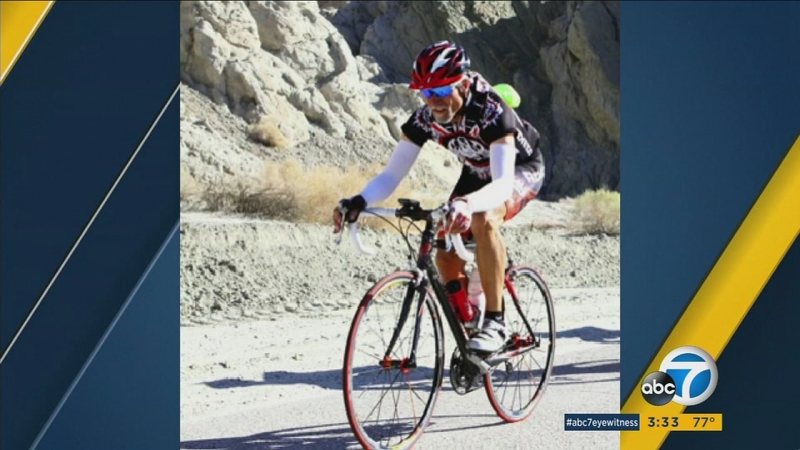 MEAD VALLEY, Calif. (KABC) -- The family of a 62-year-old cyclist who was killed in a Riverside County hit-and-run crash have asked for help in identifying the driver involved in the incident.

Duane Darling was riding his bicycle on Cajalco Road shortly after 8 p.m. July 31 when he was stuck from behind by a Ford F-150, according to the California Highway Patrol. The driver of the pickup truck did not stop to help.

"For me, I just don't know how you could hit somebody and just not even stop," said Ashley Darling, the victim's daughter. "There's no break or acceleration marks on the road. So they would have had to hit him pretty hard for how far he flew."

Duane Darling's family said the roadway where the incident occurred was a familiar route for the avid cyclist, and that his bike was equipped with a safety light.

Because he was not carrying any identification at the time of the collision, his children were not informed of his death until two days afterward.

"It is really heartbreaking to know that in his last moments we were not there," said Brandon Darling, adding that he and his sister were appreciative of the good Samaritans who rushed to his father's aid after the crash.

"We know he wasn't alone for long. People saw his light flashing," Ashley Darling said. "We are very grateful people stopped and cared and called 911and stayed with my dad."

A "ghost bike" - spray-painted white and tied to a post - was placed at the crash site as part of a makeshift memorial in honor of Duane Darling. A sign atop the post asks witnesses to visit hitandrunjustice.com, which has offered a $1,000 reward in the case.

"We're hoping obviously the person who did this would just come forward," the cyclist's son said. "Do the right thing."