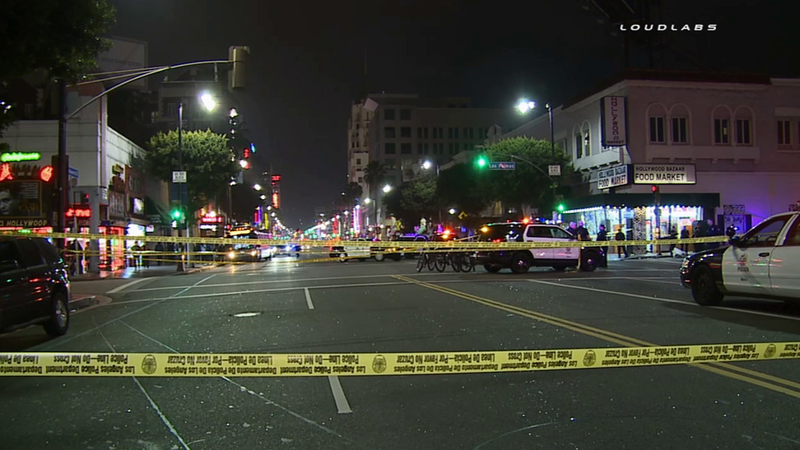 HOLLYWOOD, LOS ANGELES (KABC) -- A 23-year-old San Fernando Valley gang member was arrested for murder after a physical altercation escalated into a fatal shooting in Hollywood.

The incident was reported at about 11:40 p.m. Saturday at Hollywood Boulevard and Las Palmas Avenue. Michael Vincent Carter, of Los Angeles, allegedly shot the victim in the torso and head.

The victim, described as a black male in his 30s, was taken to Cedars-Sinai Medical Center, where he later died. His name has not been released pending notification of kin.

Detectives are not looking for additional suspects, but believe two men with the victim were seen running northbound on Las Palmas Avenue. Initially, authorities believed those two men were suspects.

Meanwhile, many people fear this popular tourist destination, known for its attractions, shopping and stars, is becoming more violent.

Miles Sam and his wife are visiting from Houston and were inside a nightclub when they heard the shots.

"All of a sudden we heard like five or six shots, and it was just basically like a stampede of people just trying to run and get out of the way," Sam said.

One local employee, who was too scared to show his face on camera, described the chaos.

Tamer Riad runs a tourist company and says the violence is affecting business.

"I don't expect business to be any better as more incidents like that occur," Riad said.

There have been several shootings and stabbings in Hollywood in recent months, and many tourists say this isn't the Hollywood they were expecting.

"We're all still kind of watching our back a little bit because we have heard of a couple of incidences," said tourist Adil Memon.

Local business owners want more patrols and a crackdown on crime, something they say is now all-too-commonplace in a town once known for glitz and glimmer.

"I hope nothing bad happens to me but God forbid it does it would not be a shock," Riad said.

Carter is being held in lieu of $1 million bail. Anyone with information is asked to contact Los Angeles Police Department's West Bureau Homicide investigators at (213) 382-9470.