KABC
VENICE, LOS ANGELES (KABC) -- A Venice Beach hotel owner was charged Tuesday with the murder of a homeless man who was fatally shot on the boardwalk.

Sris Sinnathamby, 54, pleaded not guilty to a charge of murder as his lawyer argued for a bail amount that would allow for his release.

During his arraignment on Monday, the district attorney disclosed that the fatal shooting and the argument beforehand was captured by a video surveillance camera.

One man was wounded, another was killed steps outside of the Cadillac Hotel owned by Sinnathamby.

Witnesses among a group of homeless campers told investigators that the clash started with an argument and that the hotel owner directed an armed gunman to shoot.

The gunman fled the scene and Sinnathamby was arrested. His bail was set at $5 million dollars.

"He spent time with his wife in another country. We believe he is a flight risk with the charges he is facing," she said.

Judge Keith Schwartz said he needed to strike a balance. He noted that the 54-year-old immigrant has no criminal record and did not have the weapon in his hand, but was "somewhat directing the incident at the time of the shooting." Schwartz decided to reduced Sinnathamby's bail to $1 million.

Sinnathamby's defense Attorney Alan Jackson raised an issue of race suggesting the high bail indicated a racial bias against his client because of the color of his skin and his last name.

Jackson called the bail amount "patently unconstitutional." He went on to say his client is a "U.S. citizen and holds a U.S. passport...he was not holding a weapon, he did not shoot anybody. He was there in a verbal dispute. Someone else walked up and shot someone. He did not have a gun. He did not shoot a gun."

Trutanich responded that she had viewed the video.

"He aided, abetted and directed," she said.

"He is presumed to be an aider and abettor," Jackson said. "This gentleman was at the wrong place at the wrong time and suddenly he gets this filing."

Sinnathamby's lawyer said he will be bailed out Tuesday night. His next court appearance is set for Oct. 14.

The gunman remains at large. The Los Angeles Police Department had no comment on any effort to locate him.
Related topics:
venicelos angeles countycourthomelesscourt caseshootingman killed
Copyright © 2021 KABC-TV. All Rights Reserved.
RELATED 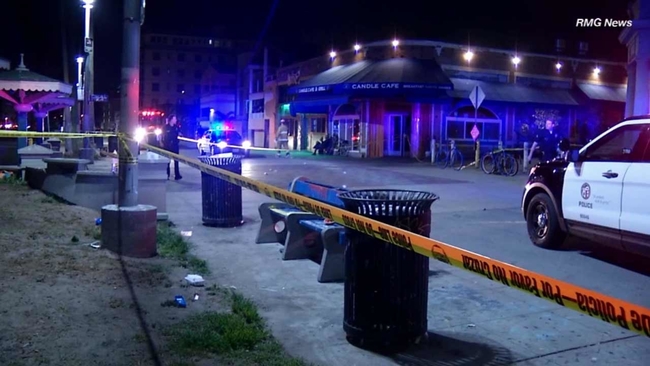