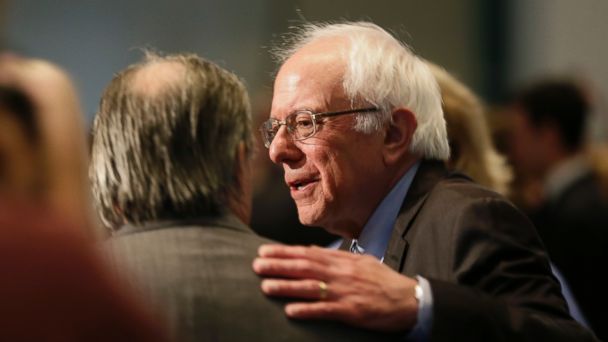 Hillary Clinton outspent Bernie Sanders by a 2-1 margin last quarter, hosted almost 10 times as many fundraisers, and spent millions on television ads when Sanders spent none.

And yet, according to the two campaigns Sanders almost matched Clinton's fundraising numbers for the third quarter. So now everyone has just one question: how did he do it?

Sanders has been able to bring in cash quickly since day one. In the first 24 hours of his campaign, Sanders was able to raise an astonishing $1.5 million from over 35,000 donors, according to his campaign, more than any other candidate who released first day numbers, including Ted Cruz, Rand Paul and Marco Rubio.

Since then, he has convinced fans to give what they can and keep giving, resulting in a groundswell of small donations. While the official FEC filings do not come out until later this month, according to the campaign, the average donation size last quarter was $30 dollars and 99 percent of all of donations to the campaign were under $100.

In many ways, donors are responding to Sanders' populist message. He does not have a super-PAC. He rails against the Supreme Court's "Citizen's United" decision, which opened the floodgates of corporate money into elections. He calls for a "political revolution," and during each of his campaign stops he says his candidacy is not about Bernie Sanders, but about the people.

As a result, donors at his events say they feel invested in and a part of his campaign, and donating to him has come to represent for many a statement against the status quo.

Considering the fact that many progressive organizations, such as MoveOn.org, say that the number-one issue for many of their members is ending the influence of corporate money in politics, it is not so surprising to see the fundraising surge Sanders is enjoying.

Progressives have shown the power of their networks in the past. In 2012 they mobilized their troops and brought in record-breaking $42 million for Elizabeth Warren's senate campaign, putting her fundraising totals ahead of every other congressional candidate in the country.

And this election cycle, technology has made it even easier for voters on the left to give. Act Blue, a fundraising firm that helps many Democratic candidates including Bernie Sanders, has focused specifically on mobile applications, allowing voters to give on their phones and, by saving payment information, easily give again to their favorite candidates.

In the final hours before Wednesday's quarterly fundraising deadline, this ability to give easily made a huge difference for Sanders' campaign. According to Sanders' campaign spokesperson Michael Briggs, the campaign raised over $2 million alone that day, and it came in quickly with $500,000 spilling in the final two and half hours before the midnight quarterly deadline.

Sanders' campaign is also using social media tactics, email blasts and even limited direct text messaging to both get his political message out and translate that message into fundraising dollars.

While Hillary Clinton's official Twitter account dwarfs Sanders' in the number of followers, on Facebook, Sanders has slightly more followers than she does (1.6 million compared to her 1.4 million).

In addition, Sanders' official campaign benefits from a very coordinated grassroots campaign called "People for Bernie," which almost shadows the official campaign with chapters in multiple states. These chapters runs their own social media accounts and are able to consistently turn people out to Sanders' events and drive traffic to his official fundraising pages.

From the beginning, the campaign has also been active on Reddit and now enjoys a huge community of active followers on that site. The "Sanders for President" subreddit page, run by grassroots volunteers, for example, is full of comments like these from the last few days.

"Yesterday I set myself up for $15/mo monthly payments for the next year! GO BERNIE! FEEL THE BERN!" writes one user.

"I donated $2 even though I only had $2.41 in my account until I get paid," writes another. "Anyone want to match or double that? Poor people can only do so much individually, but together we can raise billions."

Perhaps most telling is the comparison between Sanders and another presidential hopeful who relied on grassroots support: then-candidate Barack Obama in 2007 and 2008. Sanders is bringing in small contributions at a faster rate than Obama did. As of Thursday, Sanders had received 1.3 million donations, from 650,000 individual donors, according to the campaign. Whereas, Obama did not met the one million mark until February 2008, and in the same quarter, in 2007, Obama raised $3 million dollars less than Sanders.

"What it tells us is that Bernie has financial staying power," Jeff Weaver, Sanders' campaign manager, said. "We have the financial wherewithal that will allow for a major campaign through Iowa, New Hampshire, South Carolina, Nevada and beyond in state-by-state, delegate-by-delegate contests for the Democratic Party nomination."

On the campaign trail, Hillary Clinton often says she knew this would be a competitive race and Wednesday evening, her campaign manager Robert Mook said they were excited by their numbers. "We are thrilled and grateful for the support of hundreds of thousands of donors across the country, helping us raise a record $75 million in the first two quarters," Clinton's campaign manager Robby Mook said in a statement.