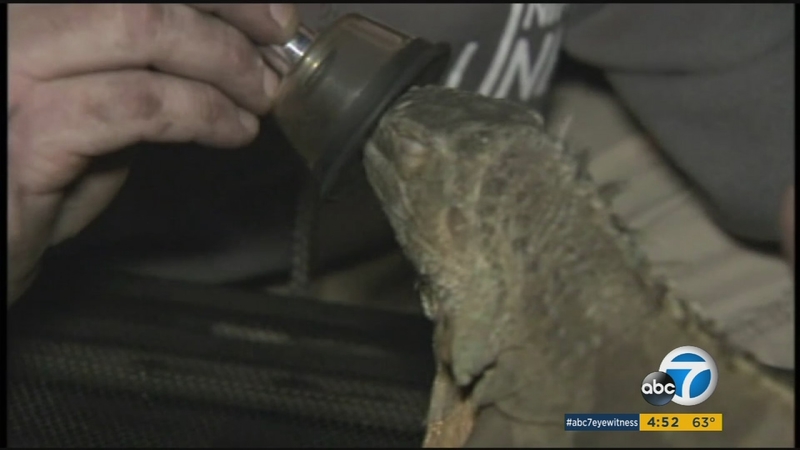 STANTON, Calif. (KABC) -- Firefighters rescued hundreds of reptiles at a store in Stanton after a blaze sparked Wednesday evening.

Crews with the Orange County Fire Authority and the Anaheim Fire Department, along with a local rescue group, were able to save the majority of the 600 to 700 reptiles.

But unfortunately not all of the reptiles made it out alive, as some died from smoke inhalation.

After the reptiles were pulled from the building on Beach Boulevard, crews used pet oxygen masks to help many of them breathe.

"They realized these lizards and snakes, some of them were on the loose, but they were trying to save as many as they could, and so they had to bring them outside, the smoke was deadly," Captain Steve Concialdi with the Orange County Fire Authority said.

Once outside though, the animals were again in danger because many of them must be kept in a warm cage.

Employees used whatever they could to keep them out of the cold.

"It was a scramble. So the firefighters, the owners and the reptile rescue group did an outstanding job of saving countless reptiles," Concialdi said.

Investigators said the fire was caused by a malfunction from an electrical outlet in the store's office.

The rescue group said all of the animals are either with the owner or have been temporarily adopted by members of the community.

For firefighters, they said this is a call they won't likely forget for some time.

"We don't normally do this, and we had to make sure we had to be careful with what we grabbed. From the snakes, to the lizards, because the guys didn't want to be bit," Concialdi said.
Related topics:
stantonorange countybuilding fireanimal rescueorange county fire authorityfirepetssnake
Copyright © 2021 KABC-TV. All Rights Reserved.
TOP STORIES
Corona shooting: Anthony Barajas, 19, dies after days on life support
Bacon may nearly disappear in California as pig rules take effect
Villanueva: 'Grave concerns' over deadly shooting by deputies on video
The Abbey in WeHo requires proof of COVID vaccination or negative test
Bacteria at beaches near Dockweiler continues to exceed standards
Florida new national epicenter after record number of new COVID cases
5-month-old baby dies after being ejected from car in Torrance crash
Show More
Family decries controversial arrest of Texas teen
Judge recuses himself from rape case against OC couple
Venice homeless encampment: Crews continue cleanup as deadline arrives
Disney joins list of companies requiring vaccine for nonunion workers
Highway 38 reopens after mud, debris flow forced closure
More TOP STORIES News