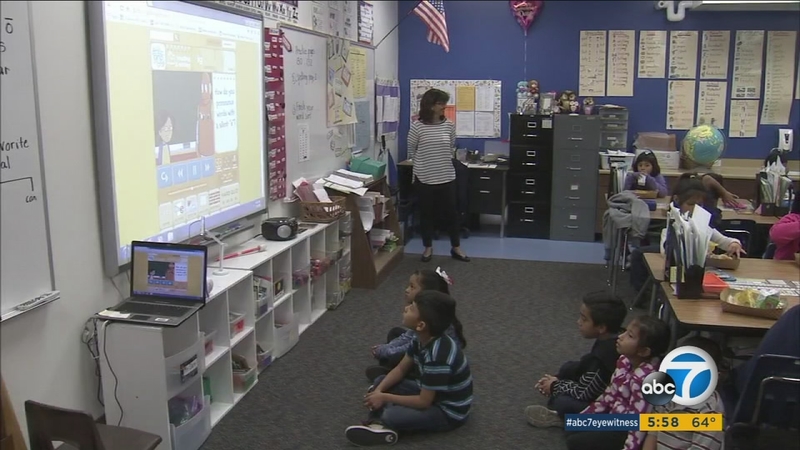 Inside the school, there's new carpeting, new flooring, and new lighting. Landscaping around the school has also been revamped.

"They added more plants and they colored the inside, they painted, they renewed everything. It looks beautiful," said Kelsy Garcia, whose younger brothers attend Oak View.

All students are now back in their normal classrooms--the school fully reopened after an asbestos cleanup began a year and a half ago. The known carcinogen was discovered during building upgrades.

"We did a lot of work here. There was abatement of not only asbestos but lead paint and mold," said Gina Clayton-Tarvin, president of the Ocean View School District Board of Trustees.

Two other schools, Lake View and Hope View also had to close. Students were bused to other campuses. For Oak View students - it meant an 18-mile ride one way.

"They really endured a lot of hardship having to be moved. They were bused every day to Buena Park to Knott Elementary School," Clayton-Tarvin said.

"It's open and it's beautiful definitely much more renewed than it was before," parent Malissa Hoffman said. "The kids were excited."

District officials said the cost associated with the asbestos problems is nearly $6 million per school.

Officials said they received some money from the state due to the emergency and the district also owns rental property in the area.

"We were able to get some loans against that property in order to be able to finance this," said Dr. Carol Hansen, Ocean View School District superintendent.

Lake View, however, still remains closed and students are attending classes a couple of miles away in Westminster. Officials said Lake View is expected to reopen this fall.