WLS
By Diane Pathieu and Leah Hope
CHICAGO -- A judge denied bail Friday for four people charged with committing a hate crime. They are accused of torturing an 18-year-old man with special needs and streaming it live on Facebook.

The disturbing video, which was viewed by people across the country, has been removed from Facebook.


The mentally challenged victim, who is from northwest suburban Crystal Lake, was kidnapped, bound and bloodied. The suspects sliced his scalp and taunted him. Police said his beating and torture went on for hours.

Police said they don't know the motive behind the apparent torture or the suspects' decision to stream it. At one point, the teens, who are black, told the victim, who is white, to say he loves black people. The suspects also made a string of profane statements about President-elect Donald Trump. At one point a suspect is heard telling the victim to, "Say f*** Trump b****. F*** Trump. Say f*** Trump."

"The fact that they tied him up. The obvious racial quotes on that they post live on Facebook, I mean, taken the totality of the circumstances, the state's attorney agreed with us," Area North CPD Commander Kevin Duffin said.

Police said it all started when the victim was dropped-off by his parents at a McDonald's near northwest suburban Streamwood on Dec. 31, for what they thought would be a New Year's Eve sleepover at a friend's house. That friend is one of the suspects.

On Tuesday, an officer spotted the bloodied and ill-clothed victim walking around in the 3400 block of W. Lexington Avenue in the city's Homan Square neighborhood, on the West Side, after he managed to escape.

Hill, Cooper and Brittany Covington were charged with residential burglary for allegedly retaliating against a neighbor who complained about the noise in the apartment where the alleged crimes occurred.

All four suspects were due in Bond Court at the Cook County courthouse on Friday.

"It's terrible. Part of what technology allows us to see now is the terrible toll that racism and discrimination and hate takes on families and communities. But that's part of how we learn, how we get better," Obama said.
Related topics:
illinoistortureassaulthate crimefacebookvideo camerafacebook live
Copyright © 2020 WLS-TV. All Rights Reserved.
RELATED 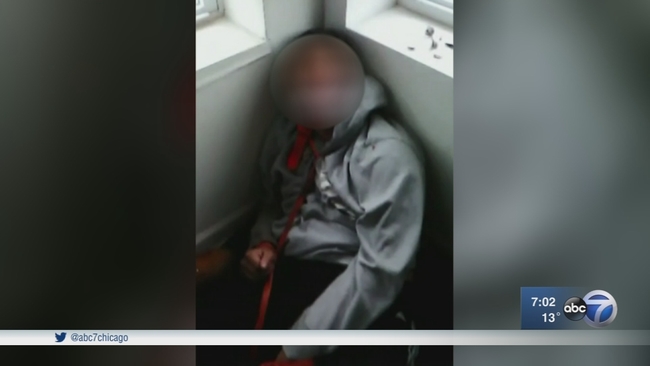