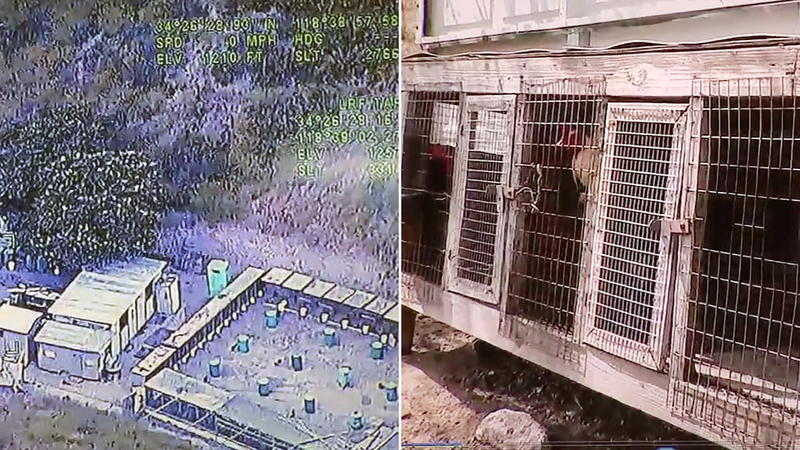 The Los Angeles County Sheriff's Department said approximately 7,000 birds were recovered from the property in the unincorporated area of Val Verde near Castaic Junction and Santa Clarita.

Most of the birds recovered from the property, which officials said was in a large remote area in a canyon, were commonly used for cockfighting.

Approximately 100 deputies raided the property and found mobile cockfighting rings, syringes, steroids and "slasher" weapons, which were strapped to a rooster's claws during a fight.

"The knife-style of fighting are particularly bloody," Eric Sakach with the Humane Society of the United States said. "The bird is being repeatedly stabbed to the chest area. It's not unusual to hear a bird to start to vomit up or regurgitate blood."

"You'll often see these guys put the bird's head in their mouth and suck the blood out of the bird's throat because that may buy the bird a few extra seconds of breathing to be able to attack its opponent and win the fight," Sakach continued.

Several dead roosters were found with wounds consistent with cockfighting, according to the sheriff's department.

Authorities detained 10 people at the property, and said they were believed to be lower-level employees who tended to the roosters.

The property owner, who authorities said was the primary suspect, was not identified by investigators.

Officials stated that the same property was raided in 2007, and at that time about 2,700 birds were seized.

Detectives said their investigation was ongoing and more arrests were anticipated in the future. Authorities said cockfighting was closely associated with Mexican drug cartels and could lead to more crimes such as illegal gambling and the sale of illegal drugs and weapons.