LA immigrant rights groups hold rally: 'We, too, are America' 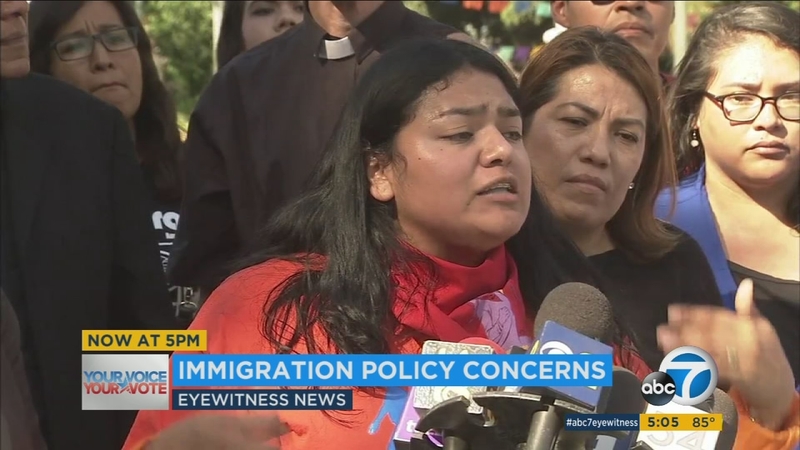 LA immigrant rights groups hold rally: 'We, too, are America'

The Coalition for Humane Immigrant Rights of Los Angeles and other groups came together to show support for immigrant families Wednesday morning.

#LIVE: “We are a nation of immigrants, regardless of race, creed or color” https://t.co/u5lTveArpy pic.twitter.com/wRypjAKw8r

Several immigrant supporters aimed to send a message that Trump, who has promised to build a wall on the U.S.-Mexico border, will not succeed in his plans to deport millions of working immigrants.


#LIVE: “We too are American, we too are citizens of the nation and we expect him (Donald Trump) to treat us equally” https://t.co/u5lTveArpy pic.twitter.com/BvPItMNO1s

"We will not let many of the threats that have been promised, as part of his agenda, to become a reality," said CHIRLA Executive Director Angelica Salas. "We tell him and we tell the Republican Party that we, too, are America; that we, too, are citizens of this nation, and that we expect that he represent us equally."

Religious community members, including priests and ministers, attended the rally and shared prayers. They held hands with distraught families as a sign of unity and strength against Trump's "platform of hate and fear."

"We must be valiant. We must go ahead. God is always with us," said Father Richard Estrada, founder of youth program Jovenes Inc.

Yamilex Rustrian, 21, has seen her share of adversity. When she was 7 years old, her mother - who lived in the states - hired a coyote to smuggle her and her 6-year-old sister into the country after their father was killed by gang members in Guatemala.

"It's something that as a young girl, nobody should have to go through, but unfortunately the struggles back home are too much," she said.

She is undocumented, and she and her sister are protected from deportation by the Deferred Action for Childhood Arrivals Act enacted by President Barack Obama in 2012. It's a policy she fears will go away with Trump in the White House.

She said she thought people would know better than to elect a man who often made racist remarks about the Latin community.

Ivan Ceja, who is also protected by the policy, is the creator of Undocu-feed, which is a Facebook page with a reach of 4 million people.