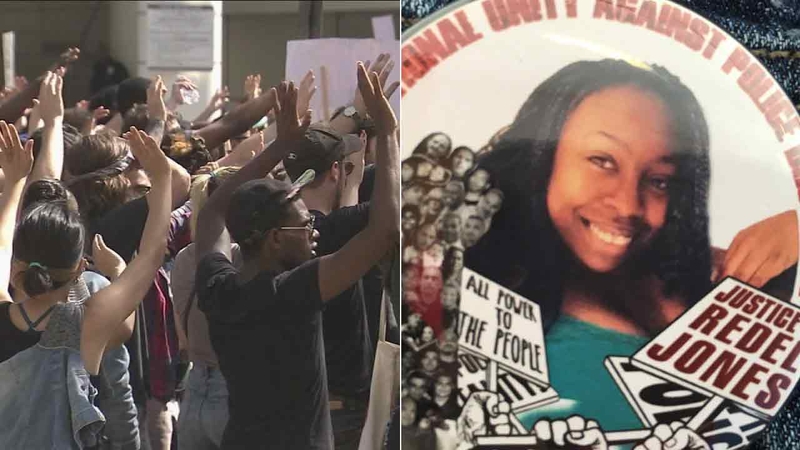 The decision was immediately met with shouts of protest from Black Lives Matter activists, who had crowded outside LAPD headquarters since the morning.

Some in the crowd shouted "Shame on you" as board members adjourned their meeting and walked from the room.

The decision came after the commission met for over an hour in a closed session.

The commission found found fault with some of the tactics used by officers in the Aug. 12, 2015, shooting of Redel Jones, but that Officer Brett Ramirez's shooting of the woman did not violate LAPD policy.

#LAPD Police Commission faults officers tactics in #OIS Redel Jones but that shooting was within policy. More at 4p pic.twitter.com/vvhGwQQC9i

Jones was shot in the 4100 block of Marlton Avenue after police responded to a call of a pharmacy robbery in the 3700 block of Santa Rosalia Drive.

Police said officers saw a woman matching the description of the robbery suspect in an alley west of Marlton Avenue, and the shooting occurred when officers tried to detain her.

Investigators said the woman was armed with a knife, and that a knife was recovered at the scene.

Tensions between police and the black community run high amid a string of officer-involved shootings, including the deaths of Alton Sterling in Baton Rouge, Louisiana and Philando Castile in Falcon Heights, Minnesota.

Rappers Snoop Dogg and The Game tried to ease those tensions Friday by gathering a crowd in front of police headquarters to engage officers in peaceful dialogue with the African-American community.