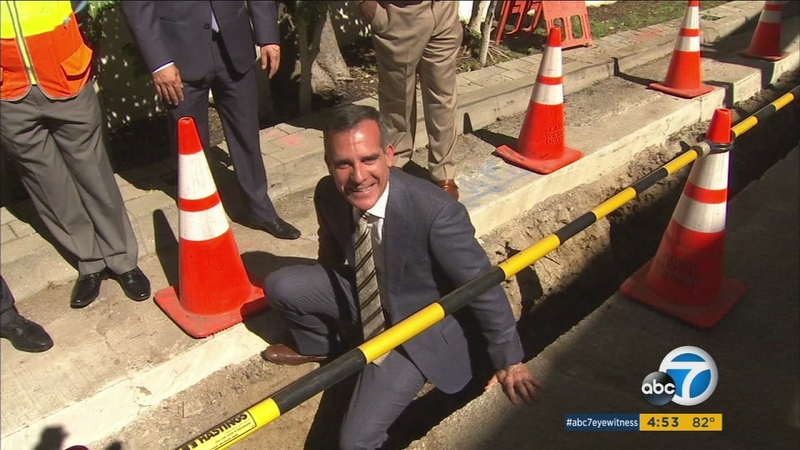 HOLLYWOOD HILLS, LOS ANGELES (KABC) -- Mayor Eric Garcetti along with the Los Angeles Department of Water and Power (LADWP) are moving forward with a plan to replace hundreds of miles of decades-old piping across the city.

"We will replace every single pipe that today is rated a 'D' or 'F' in the next 10 years. Look, we're going to pay for this one way or another. Either we pay for it upfront now by doing the right thing, or we pay for it on the back end when these burst and cause a lot of damage and waste a lot of water," Garcetti said.

Garcetti also said that the LADWP surpassed its goal of replacing more than 30 miles of deteriorating pipes in the past year.

Over 2,000 miles of the city's 6,800 miles of water pipes are over 80 years old and in bad condition, according to the mayor's office.

The LADWP stated that the plan to replace old pipes over the next 10 years will cost hundreds of millions of dollars.

While the project will be both time-consuming and invasive to neighbors, the LADWP said that they will give ample warning to residents before beginning work in their neighborhoods.

"We try to inconvenience them as little as possible, but we know tearing up a street in front of their house does cause some inconvenience. Luckily it only happens about once every hundred years, but we really will work with the neighbors and do whatever we can to provide the least impact to their lives," LADWP General Manager David Wright said.

Garcetti and the LADWP were in the Hollywood Hills on Wednesday to replace a 92-year-old water pipe. Residents in the area say that the process has been respectful and non-invasive.

"They've really minimized the inconvenience when they could. They've moved huge trucks when we would come around the bend to get in, and we've inconvenienced them, but it's been very cooperative," resident Sherry Seckel said.