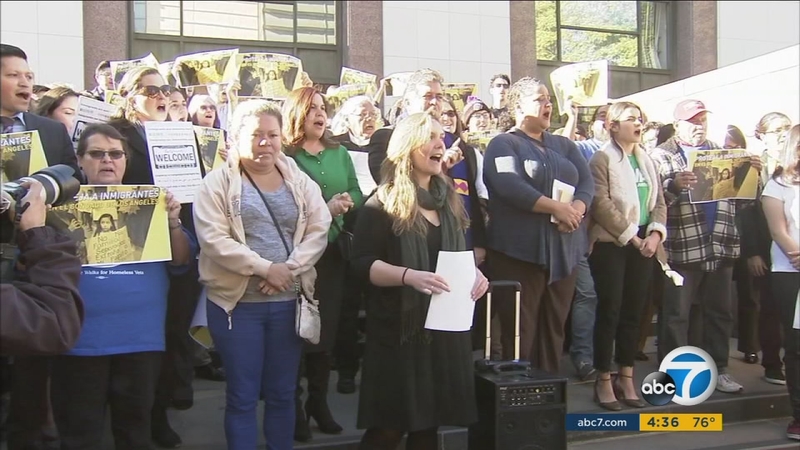 LOS ANGELES (KABC) -- The Los Angeles County Board of Supervisors voted to set aside millions of dollars for legal services to help undocumented immigrants fighting deportation.

The board voted 4-1 in favor of contributing to the L.A. Justice Fund, which is a collaborative effort between the city, county and private donors. Officials said the money for the fund would be split between the government and private foundations.

Once the cheering stopped, the jeers started from those who oppose the action. The vote means L.A. County will contribute $3 million over the next two years to the fund, with the first $1 million pledged this year.

At times, the meeting was heated as those opposed to tax funds being used to defend undocumented immigrants voiced their angry opinions.

"Illegal immigration is a crime, let's be honest," said David Feiner during the meeting. "We're talking about spending millions of dollars protecting criminals from justice."

"When you come across that border, and you don't have the right to be here, you're illegal," Robert Peete told the board. "It's the same as selling dope, shooting somebody. Illegal is illegal."

Supervisor Kathryn Barger was the only no vote.

"I don't think it's responsible for the board to allocate funding for a program such as this when we've got nonprofits already doing it," she said during the meeting.

Barger wants to explore the possibility of pursuing federal funds to help pay for the county's $3 million contribution to the L.A. Justice Fund.

The American Immigration Council reports immigrants aren't guaranteed an attorney in immigration court, with only 37 percent having legal representation.

More than 1 million of the estimated 11 million undocumented immigrants in the nation live in Los Angeles County.

The city of Los Angeles, the county and private donors may create a defense fund for undocumented immigrants who will need legal representation to fight deportation.

Mayor Eric Garcetti, who supports the fund, said there is a push to get the funds approved before President-elect Donald Trump's inauguration in January.

"We'll have a change in government next month. We expect there could be actions right away, and we need to have the beginning of that money in place to be able to help people," he said.
Chicago just approved a $1.3 million legal fund, which is one example of a major U.S. city following the same route that Los Angeles would.

Supporters said this is about justice and smart economics since immigrant workers contribute about 40 percent of the county's gross domestic product and often pay taxes. But others aren't sure it is a good use of taxpayer's money. Ira Mehlman, media director for Federation for American Immigration Reform, said he is not on board with the creation of the fund.